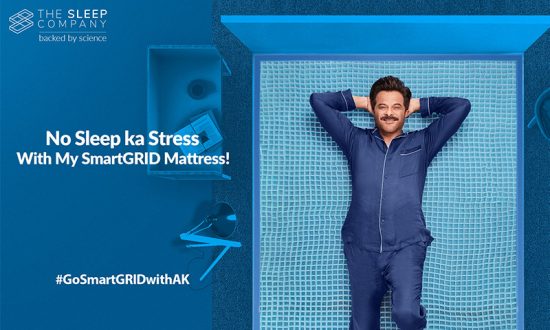 With Anil Kapoor as its brand ambassador, Asia’s SmartGRID mattress pioneers and advocates of the sleep-tech movement in the country, The Sleep Company today launched its first brand campaign – #GoSmartGRID With AK! Giving audiences their first glimpse of the Bollywood megastar ‘in the grid’, the campaign will be digital-first, launched across the company’s social network and other digital channels.

Combining information and entertainment with Anil Kapoor’s distinct dynamic energy, The Sleep Company’s first brand campaign is an infotainment treat. Conceptualized and crafted by the teams at The Sleep Company, brand studio Anomalous and production house Another Idea, ‘#GoSmartGRID With AK!’, explores the ordinary mattress woes of the average Joe. Led by Anil Kapoor’s signature quirky disposition the film dispels the notion of sleep stress with the brand’s patented SmartGRID mattress! adding proof to the technology with the telltale mattress experiment – the raw egg test. Effortlessly passing the test, The Sleep Company demonstrates the incredible agility and intelligence of its patented SmartGRID technology. The 60 second ad film is a digital exclusive and will be followed by three short films later this month.

Bollywood megastar and customer as well as Brand Ambassador of The Sleep Company, Anil Kapoor said, “The Sleep Company is all set to revolutionize the way we sleep and sit, giving India the perfect surface to rest and relax. I am thrilled to be a part of their journey to do so, especially since I am consciously driven by health and fitness, with sleep playing an important role in my active lifestyle. It was so much fun being a part of the ‘#GoSmartGRID With AK!’ campaign and trust me, the eggs in the egg-test are real!

Commenting on the launch of their first brand campaign, Priyanka Salot – Founder of The Sleep Company said, “It’s been almost two years that we’ve been in the comfort solutions market and our growth so far has been exponential. Adding another dimension to India’s slowly burgeoning sleep economy, we want to spotlight the sleep problems, the wrong mattress can cause and how with the right innovation the sleep experience can be elevated. ‘#GoSmartGRID With AK!’ is our first few steps in doing so. We have big plans for The Sleep Company in terms of products as well as market expansions and with this campaign we’re excited to further elevate the brand’s visibility in the mainstream market. Furthermore, we’re even more thrilled to be able to do that with such a charismatic persona like Anil Kapoor who we are lucky to call our customer first and brand ambassador second.”

Since its launch, The Sleep Company has revolutionized the comfort and sleep solutions market with its disruptive, patented SmartGRID technology created with super stretchy polymer. With a D2C model that utilizes an effective combination of the digital marketplace and its own digital assets, the company has witnessed incredible success, achieving a 50 CR run-rate and a 10X growth in the last year or so. This campaign is a part of the company’s brand investments based off of its recent funding, which saw a funnel of fresh capital of about INR 13.4 CR.