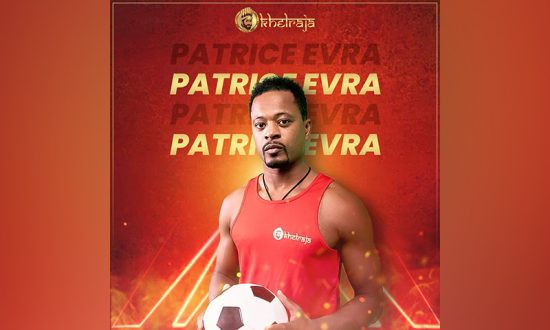 Khelraja announced Manchester United icon Patrice Evra as their brand ambassador. Already among India’s hottest gaming platforms, the move will further help Khelraja amplify its advantage as they look to strengthen their grip over the industry.

Evra has always been a likable figure among the footballing faithful, and teaming up with him puts the brand in a very good position – more so given the footballing action that awaits us this year.

Speaking on the collaboration, the Frenchman said, “It’s an honor to be a part of Khelraja! They share the same ambitions as me, and I am looking forward to a long and fruitful cooperation with them.”

Reflecting on this exciting new partnership, a delighted Viren Modi, CEO of Khelraja said “We at Khelraja are thrilled to welcome Patrice Evra as our first brand ambassador. Evra embodies our values of hard work, honesty, integrity, quality, and a quirky sense of humor, all of which are important to what we want Khelraja to be. We are looking forward to our joint venture’s success”.

Evra’s illustrious career stretched over two decades. The legendary left-back won nearly everything there is to win at the club level, lifting five Premier League titles and the UEFA Champions League with Manchester United, and two more Series A titles with Juventus, bringing his tally to an astounding 20.

In a year filled with important footballing action, Evra’s reputation as a fan favorite appears to be one of Khelraja’s most valuable assets. It’s a clever move, but more importantly, it’s well-timed.