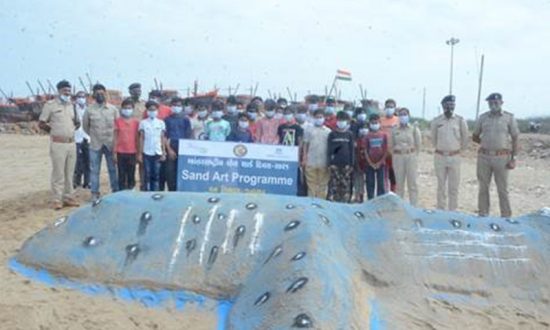 Every year with great pride, Tata Chemicals and the people of the community around Mithapur get together to celebrate the existence of the gentle giant on International Whale Shark day. In its relentless efforts to save this endangered species, Tata Chemicals successfully hosted a month-long “Save the Whale Shark campaign” that included various activities and engagements with local fishermen, students, heads of the villages and the community. The stakeholders showed active participation in raising awareness about Whale Sharks and the significance of their existence in our ecosystem.

Ms. Alka Talwar – Chief Sustainability & CSR, Tata Chemicals, said “At Tata Chemicals, celebration of the “International Whale-Shark Day” is a reminder about the conservation of biodiversity and its significance, which is key to our survival and achieving long-term sustainability goals. Saving of the Whale Shark is one of our prominent biodiversity conservation initiatives which have borne fruit over the years and, we express our gratitude to our stakeholders whose contribution has greatly made this effort a success. We, at Tata Chemicals, will remain committed to supporting the flora, fauna, and the wildlife species, and will reiterate our company’s ethos by conserving nature and its rare mammals in years to come.”

In addition to this, many activities engaging the communities were conducted like, drawing competition for students, beach cleaning and sand art installation, ‘Whale Shark on Wheels’ rally and awareness campaign among the local fishermen. Amongst others, webinars in regional languages were hosted to reach out to a larger audience. This extensive campaign programme received an overwhelming response from local communities offline and virtually. The closing ceremony was graced by Mr Senthel Kumar from Marine National Park, Mr N Kamath VP, Tata Chemicals and Mr Satish Trivedi Dep. Manager (Retd.), Tata Chemicals. Fishermen who immensely contributed to this conservation initiative, were felicitated at the event.

Inception of the Project

Uncontrolled hunting of Whale Sharks in the Saurashtra region of Gujarat threatened the species’ survival; this led to the inception of the saving initiative in 2004. The company partnered with the Wildlife Trust of India, the Gujarat State Forest Department to launch ‘Saving of the Whale Shark’ campaign. At that point, it was critical to change fishermen’s perception about the survival of this species and raise awareness for the ban on killing to be effective.

A study was carried out by the Wildlife Trust of India (WTI), elucidating the Whale Sharks breeding pattern on the coastline of Gujarat. To elicit an emotional response from the local community, Shri Morari Bapu, a well-known spiritual leader was roped in to be the campaign ambassador. He blessed the Whale-Shark with the title ‘Vahli’ (meaning – the dear one) citing its’ visit on the shores similar to a daughter’s visit to her maternal home (‘maika’) for childbirth.

This conservation project has successfully rescued more than 800 sharks till date. The company continues to conduct research on whale shark biology to establish a scientific database to help in its long term survival. Taking inspiration from the success of this project in the Saurashtra region, similar conservation initiatives have been initiated in other coastal regions of India such as Kerala, Andhra Pradesh and, Lakshadweep.