A New Dawn in Indian Aviation 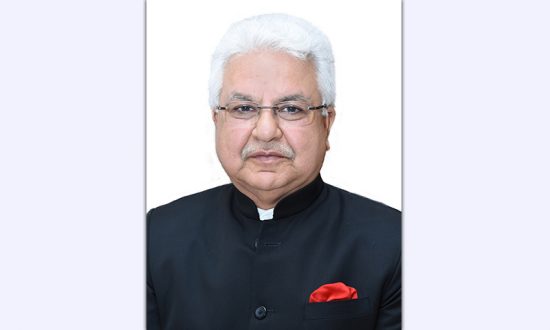 Mr. Pradeep Multani is an eminent industrialist and a renowned name in the field of traditional medicine. For the last 32 years, he is the Chairman of Multani Pharmaceuticals Limited, an 83-year-old prestigious multi-crore limited company. He has an enriched experience of more than 40 years in the manufacturing of Ayurvedic and Unani medicine and products. He is currently serving as a President of PHDCCI, Co-Chairman, FICCI AYUSH Committee, and President of Association of Manufacturers of Ayurvedic Medicines (AMAM); moreover, Mr. Multani has been conferred with ‘Distinguished Entrepreneurship award for MSME 2019’ by PHDCCI. He holds a Bachelor’s Degree in Economics (Hons.) and Diploma in Labour Law from Delhi University.

Celebrating a glorious journey embarked by the Indian democracy along with a robust economy, it’s heartening how India is moving forward under the able leadership of Prime Minister Narendra Modi and inspiring the fellow countrymen to continuously work together for nation-building and deepening India’s footprints across the globe. As one of the fastest growing economies of the world, India offers great hope today and in the times to come.

Significant policy reforms are being drafted in accordance to positioning India in the top rankings of being a global economic power. The “Atmanirbhar Bharat Abhiyan” is one of the most significant nation-building mission of independent India; a step to foster the local entrepreneurial ecosystem and export potential in India. Reforms like the Udan UDAN (Ude Desh ka Aam Naagrik), Regional Connectivity Scheme (RCS), National Civil Aviation Policy 2016, among other, have been formulated with the objective of making air travel affordable and widespread, to boost inclusive national economic development, job growth and air transport infrastructure development and extensive air connectivity of all regions and states of India, have brought about considerable boost in the aviation sector

In a country where train travel has long been the dominant mode of long distance travel, India’s aviation sector has increasingly established itself as a fast, affordable and credible alternative. Emerging as one of the fastest growing industry in the past three years, India has moved up to be the third largest domestic aviation market in the world. If reports are to be believed, India is expected to overtake UK to become the third largest air passenger market by 2024 and the with a population of more than 1.3 billion, India’s potential for further growth and rapid development in this sector is certain. The sector witnessed its share of peaks and troughs in terms of growth and investments under the private sector before the Covid-19 pandemic and suffering with an exception of national carrier Air India, has given the much needed impetus by disinvesting Air India to TATA Group, India’s largest and the oldest conglomerate, its original home.

For a long time, the sale of Air India to a private player, as part of the disinvestment plan of the government, has been in the news. As a path-breaking economic reform, a rational move like this should be welcomed that instils immense trust in India’s private sector as the flag-bearer of economic growth and development. Tata Group’s contributions for the nation need no fresh introduction and the public trust it gets is unmatchable, hence the Indian industry and people are quite positive on a new dawn. All eyes of the Indian aviation are now on Tata Group for playing the important role in securing affordable air mobility and reshaping the fundamentals of the aviation business in India, unleashing its true potential.

Air India, a brainchild of iconic industrialist and Bharat Ratna JRD Tata was started way back in 1932. With India’s independence in 1947, the government bought its 49 percent stake. Of late, in 1953, the government bought the remaining stake and Air India was nationalised. While Air India continued dominating the Indian skies as the national carrier, the actual growth potential of aviation under the private sector lost for no good reasons. Thankfully, the economic liberalisation started in early 1990s paved the way for private players to enter the aviation sector. However, the spirit of liberalisation couldn’t influence the government enough to stop running Air India and letting the market see the best results of perfect competition.

Tata Group’s investment of Rs 18,000 crore in Air India is surely a long-term bet, beyond the acquisition— it is likely to be much higher than this for augmenting the capacity and making it ready to be the market leader. The deal also reflects well on Prime Minister Narendra Modi’s vision of reducing the government’s role in the businesses and making it an active enabler rather than a competitor of the private sector. Also, it supports the government’s efforts to save taxpayers from paying the enormous amount in covering the losses and piled debts of Air India. From Air India’s asset sale, Rs 14,718 crore is expected to be generated—thus reducing the burden on the government with the standing debt to Rs 28,844 crore. Originally, the debt rose to Rs 61,562 crore. Considering how the earlier efforts of Air India’s partial sale failed in the past, a plan of complete transfer to a private player succeeded and should be hailed as a big achievement.

It is important to recall that since Air India (earlier flew only international flights) was merged with the domestic carrier, Indian Airlines in 2007, it never made any profit. Reportedly, since 2009-19, the government has spent over Rs 1.1 lakh crore of taxpayers to keep Air India flying in the sky. By August 2021, Air India’s total debt has gone up to Rs 61,562 crore with a precarious operational condition where to keep it in the air, the government had to suffer a daily loss of Rs 20 crore. This was something unsustainable, which was effectively acknowledged and dealt with by the government.

Tata Group Chairman Emeritus Ratan Tata made the public statement through a brief post on his Twitter, “Welcome back, Air India”—and his words marked a course-correction in the history of India’s aviation sector. Tata Group and Tata Trusts have been known for leading the momentums of industrial development in India and globally, also all these institutions have been setting the stellar benchmarks in terms of supporting the institution-building, nation-making initiatives and people through direct and indirect positive interventions. As Air India is now back to Tata Group, the sentiments are quite revived in the industry circle and among the public. This is a sort of recognition by the Government of India in India’s corporate sector, which naturally knows its social responsibility and never fails to rise to the occasion.

The industry has the support of the government and even further policy changes should help industry to act on the opportunities from both domestic and global markets, so there are reasons to be sanguine for imminent positive outcomes in the times to come. The Indian industry has the required bandwidth to revolutionise yet another front of the economy, at this point of time, a good show is the need of the hour. PHD Chamber of Commerce and Industry (PHDCCI) has been working to support the mission of the government and taking forward the “India Growth Story”, it welcomes a major reform by the Government of India by letting the industry handle the aviation businesses and creating a very healthy ecosystem for its exponential growth ahead.

It rarely happens when the aspirations of the government, industry and people are the same. We are witnessing something very positive around us. At the intersection of transformational changes, this is the time to scale up our public infrastructure, mobility and connectivity. The wishful outcomes are imminent.

The Benefits of Artificial Intelligence for your Business
What’s Your Value in 2023?
Transforming the Executive Search Industry & Making an Impact
Bring the Zing – 5 Keys to Powerful Presentations, Briefings, and Meetings
The Exhaustion Epidemic Might Wipe Out Your Workforce
Think Radically to Achieve Success
CONTACT US