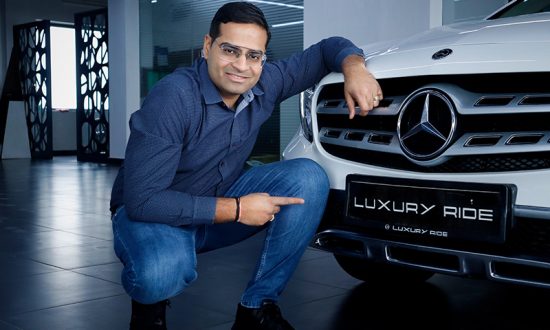 Sumit Garg is the MD and Co- Founder of Luxury Ride, a final shopping destination for the foremost exclusive and fascinating pre-owned luxury cars. Sumit was born to a business family, the path to entrepreneurships was always given. He has completed engineering from RVCE engineering college and right after his college he founded KoiBhiCar.com in 2012, an online marketplace for pre-owned luxury cars. After a quick realization about the industry, Sumit shifted his business to an offline model and established Luxury Ride in 2015 along with his two friends. At Luxury Ride, Sumit oversees various departments and his prime focus is exponential expansion of Luxury Ride across India.

The effect of COVID-19, alongside the new environmental guidelines surrounding BS6 emission cars norm, reduced the interest in new vehicles a few months back. An increase in the number of buyers then choose to skip their plans of purchasing new vehicles and consider a pre-owned luxury car in around the same budget.

Also, post pandemic has been a boom for the overall pre-owned car market. The consumer buying behavior has been affected during the pandemic, and the demand for pre-owned luxury cars is expected to play a pivotal role going forward in the industry.

The desire to own a car as a ‘status symbol’ is the first and foremost reason for customers to buy a car, especially in T2 cities. People prefer buying a pre-owned car as it can get them the desired list of features. Interestingly, the study also shows what variants buyers prefer in T1 and T2 cities. They concluded that people in T1 cities actually prefer mid-spec variants as they intend to use it only to use it for short term, and are seen more as a tool to commute in. On the other hand, in T2 and T3 cities people prefer purchasing top-spec variants for pre-owned cars because they come equipped with more features and safety, and they tend to hold on to it for longer duration. Additionally, 30 percent of buyers even added accessories to their pre-owned vehicles at the time of purchase.

We have also seen an increase in demand for pre-owned luxury cars during the festive season specifically from Tier-II and Tier-III cities of India and it is going to get more intense with time. The aspirational buyers from the Tier-2 and tier-3 cities come searching for pre-owned luxury cars for better returns on spending. The interest is to such an extent that half of the used car owners are from these non-metro cities.

The luxury pre-owned car industry is set to receive a much needed regulatory and policy boost from the government.

It is the customers that make or break a company and we have revolutionized the overall pre-owned luxury car industry by being the only car dealer that operates as a one-stop solution for the customers; Assured buyback, One year extended warranty and LR 3yrs Basic Service Package on retailed cars. By focusing on the 360-consumer life cycle with customer loyalty. Recurring service business with Warranty and Service package. Cars maintained by us will get the customer a better exchange value for an upgrade from Luxury Ride. Unlike Luxury Ride, no pre-owned luxury car retailer offers End to End customer service verticals.

With these services we have sold more than 1200+ pre-owned luxury cars and have provided services to 10,000+ car owners. Our objective is to expand our presence nationwide and have at least 50 outlets PAN India in the next 4-5 years.

We have taken a mission to make the pre-owned luxury car industry an organized market by raising the service standards.

The Benefits of Artificial Intelligence for your Business
What’s Your Value in 2023?
Transforming the Executive Search Industry & Making an Impact
Bring the Zing – 5 Keys to Powerful Presentations, Briefings, and Meetings
Remote Hiring and the War for Talent: 3 Tips to Help You Win
What is ahead for LifeTech Industry in 2022
CONTACT US