Challenges and Opportunities in the Progress of Brain-Computer Interface 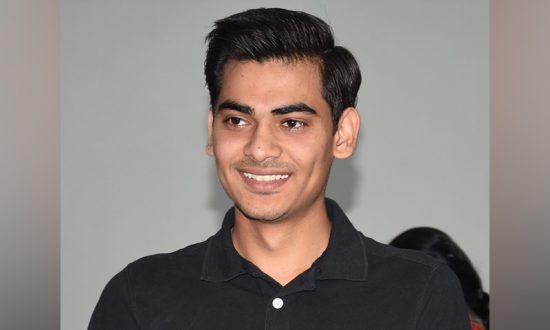 Abhijeet Satani is an internationally recognised neuroscientist researching brain to computer interfaces. A holder of several patents, he is best-known for his invention – cognitively operated system, computer aided controlled prosthesis and Plant to human interface. Born and brought up in Ahmedabad, Gujarat in a family of doctors – Abhijeet was all set with clear prospects about a career in Robotics. However, wanting to feel the waters before diving right into a monotonous university life, he promptly explored the vast field practically.  Delving into research and experiments revolving around the BCI and has been navigating through the architecture of the brain for more than a decade now, his interdisciplinary acumen complemented by the supervision of luminary scientists has seen him create numerous inventions that were previously thought to be possible only in fiction. Thanks to years of his research, Satani has been crowned with numerous accolades and patents in his name.

Brain Computer Interface (BCI) technology is a dynamic and robust communication tool between users and their systems. This technology is capable of issuing commands without the use of muscle intervention or any other external devices and has been contributing majorly to the medical field – ranging from prevention to neuronal rehabilitation for serious injuries.

In fact, the initial development of BCIs was done by the research community for its applications in the biomedical field, with a significant focus on advancing in assisted devices. They proved to be supportive in rehabilitating the physically challenged and locked-in users with movement abilities and also with motor functionality that was lost. The positive results from the start, as well as the prediction of BCI’s future, have led the research community to analyse its involvement with non-paralysed individuals with the support of medical applications.

Furthermore, by functioning as a communication bridge between the human brain and the outside world – the BCI system works on removing the need for the usual medium of delivering information. The idea of receiving messages from human brains and analysing their thoughts was being managed with the help of BCI. This led to creating systems that could support people with disabilities to put their opinions out in different formats using various methods in spelling applications, silent speech communication, or semantic categorisation.

With time, the scope of research was expanded to include non-medical applications, too. Today, BCI speaks for a rapidly expanding field of research with respect to application systems – with several applicable areas showing the potential to vastly benefit from brain waves in facilitating or achieving their objectives. Mind reading and remote communication have their distinctive mark in various fields, such as education, self-regulation, production, marketing, security, as well as games and entertainment. It creates an understanding that goes both ways between the systems surrounding the user and the user themselves.

With the development of BCIs, there have been multiple new studies that explored the use of this interface as an input device to understand the generation of hands-free applications while targeting normal individuals. However, there have been some doubts regarding the use of BCIs with healthy users. One of the issues is that the poor information transfer rate (ITR) of BCIs has led to reducing the commands a user can give. Sources claim that this issue restricts the use of BCI for locked-in people, and it would be challenging for it to keep up with common communications ways or human-computer interfaces too.

On the other hand, BCI could be helpful, especially for safety applications or applications where it is difficult to move instantaneously and where the response time is crucial. There are also applications of BCI in increasing the accuracy of HCI systems, which results in BCI’s contribution in diverse fields ranging from industry to Smart transportation, and entertainment.

However, even with success, it is clear that Brain-Computer Interfacing still needs to overcome multiple technical challenges. These challenges include the crucial usability and technical disputes that face brain signal utilisation in various components of the BCI system and the condition posed by the acceptance of the user to deal with a completely new and innovative discovery, amongst others.

Hardware truly plays a vital role in development of consumer BCI systems. That does not deny the challenges that have hindered the implementation of existing BCIs, which has automatically led to prioritising the development of hardware that is convenient, comfortable, and is stable with signal acquisition.

Clinical-grade BCI systems are often wired. With just 26 electrodes positioned on the skull, the acquisition part of wired BCI systems generally comes with bulky and heavy amplifiers and preprocessing units. Along with that, connection wiring is usually complicated with many cables between the electrodes and the acquisition part. That leads to a longer preparation time for measuring EEG signals. All the while, due to cable constraints, the user’s movement gets limited.

The use of gelled electrodes is still more in uncontrolled environments despite the challenges, which points toward a certain level of distrust towards the reliability of dry electrodes. And the majority of the teams I have come across use laboratory-grade EEG amplifiers, which shows that no teams really rely on consumer-grade devices to achieve high accuracy.

With respect to scalability, we can say that wireless BCI is definitely an improvement over the normal wired ones. Yet, the issue of battery life, form factors, and weight still remain.

There are plans to create a wireless, scalable, non-invasive BCI while maintaining the balance between an ‘always-connected-state,’ high cost of sampling rates, and a better battery life to sustain daily usage over a period of long hours. And let’s face it, users will be happy to know that they won’t have to wear cumbersome headsets or sit for long setup times or during training, which is also a big win.

Lack of applications in day-to-day life

Multiple companies have introduced BCI applications in various parts related to entertainment and health care. However, these applications have proven not to be nearly enough to make a notable contribution to our lives. For instance, it is highly unlikely that people will be convinced to spend 300$ for a non-invasive BCI device to monitor their sleep quality. Multiple experts believe that EEG does not hold the potential to make a significant difference in our daily lives.

Providing value for many different user populations is one of the critical disputes faced by non-invasive wireless BCIs. A way around this would include integrating smart homes with BCIs by providing mobile APIs and using Bluetooth Connectivity. We could also find answers by improving the connection between Smartphones and BCIs, by using things like visual keyboards with messaging apps.

We could also develop further applications that have improved decision making, assisted-human operations and efficiency at work, dedicating it solely to human-machine collaboration.

The idea being Clinical-based EEG-based BCI is to measure and analyse a patient’s emotional and cognitive reactions to a specific set of elements, which helps the medical team to understand and collect a patient’s feelings towards sensitive topics. This definitely opens up the market for companies collecting brain data that is lucrative enough to be collected and sold to third parties without the consent of the data’s owner.

Hence, it becomes gravely necessary for BCI companies to address this trust deficit, because the rise of potential buyers will also lead to an increase in cultural barriers as BCI becomes more popular in the market.

The widespread adoption of commercial BCIs will depend on explaining how safe the device is and how users’ brain data is being used. Since EEG can directly extract sensitive information from the brain irrespective of the user’s knowledge, this element is a very crucial part of the development and usage of BCIs.

We Need to Stop Our Robotic Skepticism
How Women in Real Estate Can Overcome Challenges and Thrive
How AI is Set to Transform the Workplace
Why Leveraging Data in the Digital Age is Crucial to Business Success
Why Do We Need More Women in the Leadership Roles?
Drone Industry – Gaining Momentum
CONTACT US