COVID-19: One Good Reason to Invest Heavily in Smart Cities

India’s major cities are now designated as coronavirus red-zones and experts say our fight against COVID-19 now rely on the successful use of the smart city investments. “Through tech-powered war rooms, dashboards, and surveillance systems, smart cities have been able to provide constant updates on movements during the lockdown, as well as data of those affected by COVID-19,” says Saily Lad, Director of Volksara and Krystal Group of Companies. A prominent name in technology-led securities in India, Saily, in an email interaction with CXO Outlook, talks about barriers in deploying smart technologies Indian in cities, the impact of 5G can make in India’s Smart City Mission, the future smart cities in India, and many more. Here are the excerpts.

In India, how is smart city infrastructure helping us in the fight against COVID-19?

When the Smart City initiative was first launched across the country, its development and influx of technology in various operations has today proven to be a huge boon in the fight against COVID-19. At the Pimpri Chinchwad Municipal Corporation, for example, the whole region is being closely monitored through a war room, using the latest Smart City software and technology. Using GIS overlapping on Google Maps, the PCMC is able to monitor containment areas. They are also employing automated dashboards with real-time updates on positive cases, as well as monitoring the region through additional CCTV cameras which have been set up.

In Bengaluru too, a Smart City COVID War Room has been set up with a data dashboard of patients, their contacts, city and taluka-wise data, which is compiled through a host of software. Vadodara too has deployed surveillance systems through helium balloons fitted with cameras and PA systems to monitor the on-ground situation. A dashboard monitoring system has also been set up in Kakinada.

What do you think are currently the main barriers in deploying smart technologies in cities and towns?

Budget allocations are one of the biggest challenges in deploying smart technologies. Without the right funds available, it can greatly limit the development of cities. Besides this, connectivity is another challenge, as some of the smart cities announced are based in areas with limited connectivity. As a result, building a standalone connection becomes a costly affair, without a 100% guarantee of reliability.  Having said that, it would be wrong to entirely blame the government and allied services for the slow pace of development of smart cities. We need to create much more awareness on the benefits and maintenance of infrastructure around us. Indifferent attitudes towards anything that is for our benefit, undermines the government’s attempt to bring us at par with international entities. This can be changed though, through stricter laws and their implementation, especially in the social segment, to better use the smart city infrastructure.

What are the key infrastructure issues when it comes to transforming Indian cities? How do you foresee these issues evolving in the coming five to ten years?

I think when it comes to transforming our cities, we need to be focused and have a clear definition of where we are, and what we want to achieve.  Just as London focused on easing traffic congestion, and Madrid invested in technology, India too needs to define one core focus area in terms of infrastructure, and start here, rather than attempt multiple projects at the same time. In a city like Mumbai, for example, it is no secret that our roads are chocking, but simultaneously, there are multiple metro projects underway. Over the next few years, we can expect these to become functional, easing the pressure on the roads, reducing pollution, and cutting down travel time. If a similar approach is taken when developing smart cities, I believe we can see development peak across the country, and smarter approaches being taken to meet the problems of the future.

Where do you think governance stands in terms of priority when we want to achieve sustainable smart cities?

The government is on the right track with its smart city mission, but for us to truly call ourselves smart, our cities need to be developed with foresight. We need to have foresight into the understandings and requirements of the future. Most of the development plans are created in collaboration with academia, governments, industries, and civil society who come together to envision and implement the same.  If we are to truly see these plans materialise, our priority focus areas should be engaging with denizens to address their needs, while simultaneously moving towards e-governance. In addition, holistic city plans, with a vision for achieving zero waste can become a reality, only if we are to address current problems at a grassroots level and work our way up.

In India, what would you list as the biggest challenges in deciding on what technology to invest in and what strategy to adopt?

With respect to smart cities, one of the biggest challenges in adopting the technology will be that of network connectivity.  For any smart city, its management is heavily dependent on cameras, sensors, and other new-age technologies. As these gather large amounts of data, processing it too should ideally happen in real-time, for which a high-speed internet connection is mandatory. Unfortunately, most places in India are yet to have this in place, which should definitely be considered before investing in technology.  The government should also consider the very real possibility of a breach of cybersecurity, and sensitive data falling into the wrong hands when setting up data centres. Besides, they should also ensure that they have hired efficient technical support to handle the backend operations.

What will be the impact of 5G in India’s Smart City Mission? What are the major challenges for the country to introduce 5G networks? How can we overcome those challenges?

A large number of elements in a smart city rely on internet connectivity, making it integral to adopt technology that promotes uninterrupted connectivity in a seamless manner. 5G technology, for example, offers higher bandwidth, performance guarantees, and delivery, besides reducing the time taken to carry out a function. As a result of their higher data rates (1-20 Gbit/s), consumers can download content faster. Besides this, it also has much lower latency (1 ms). This ensures users experience fewer delays when requesting data from the network.  Taking this into consideration 5G has the potential to be a great support to smart cities, especially with regards to security systems. It can significantly reduce the time taken to combat attacks and resolve potential threats.

What does the future of Smart Cities in India look like? What are developments and trends that will dominate the Smart City initiative in the coming year?

The year 2020 has not gone the way anyone could have envisioned. What has however been a saving grace is the way smart cities have led the way in the fight against the current pandemic. When the initiative was launched, it was poised to house 40 per cent of India’s population, as well as contribute 75 per cent of India’s GDP, over the course of the decade. This year though, there is a larger sense of uncertainty in the economy, but what we can say is that smart cities will be defined by their use of technology to monitor regions in real-time. Through tech-powered war rooms, dashboards, and surveillance systems, smart cities have been able to provide constant updates on movements during the lockdown, as well as data of those affected by COVID-19. Also known as the nerve centres for city managers, smart solutions are able to create situations awareness, coordinate activities, disseminate information, as well as provide predictive analysis. Smart cities this year have also stood out for their use of tracker applications in monitoring isolation cases, logistics, and creating telemedicine opportunities, using the latest software and technology. 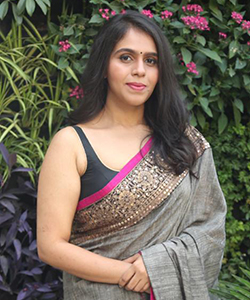 Saily Lad, along with her team at Volksara, works on providing comprehensive security and safety solutions, along with the integration of products, systems and services that are backed by a highly-skilled software R&D team adept in software application development in advance technology domain of Security Surveillance. Under her knowledgeable and competitive guidance, Volksara was awarded the Best Safe City in India (Nasik, Kumbh Mela) for their services provided in the securities space. A goal-oriented, fast decision-maker, Saily’s efforts were also honoured through the 1st Young Women Entrepreneur in IT Industry award.

With a BA in Strategic Management and Consulting from Nottingham Trent University and an MSc in business consulting from the Royal Holloway University of London, under her belt, Saily has developed the skills and know-how to become one of India’s leading tech entrepreneurs. Through her work on the Smart City project in India, she has been recognized for her efforts and awarded the Best Safe City in India (Nasik, Kumbh Mela). Apart from work, Saily is a voracious reader, who loves indulging in a vast variety of genres like fiction, autobiographies, religious, non-fiction, and many more.

Papa Kehte Hain… Financial Lessons From My Dad
How Banks Can Lend Faster, Smarter And More To Scale-Up Businesses
How Are Legacy Brands Combining Their Leadership With The New Age Leaders To Create A Successful Business
Innovation Is An Act Of Leadership In Fintech And Banking
How is COVID 19 Redefining the Global Supply Chain Model?
COVID-19: A Critical Time to Embrace HR Technologies
CONTACT US