COVID-19 Rage to Keep the Shared Currency Under Check

EURUSD pair has strengthened for by 4.76 per cent since the start of August 2020 and in line with its international counterpart, EURINR has depreciated by 3 per cent during the same time frame. Meanwhile, the dollar index has declined by 4.2 per cent in the same time frame. However, Euro has remained under pressure in recent times on account of the rising number of cases in coronavirus in major European economies.

Spain and France become the new hotspot in the EU

Major European economies are downgrading already dire economic forecasts on the back of the second wave of coronavirus cases in most parts of the European Union. EU has recorded more than 6.3 million cases in totality.

Spain has been recording nearly 9500 cases and France has been recording on average 14000 cases every day since the start of September. In-Line with partial lockdown and restrictions in certain parts of Spain and France economic recovery is likely to plateau out in the fourth quarter of 2020. 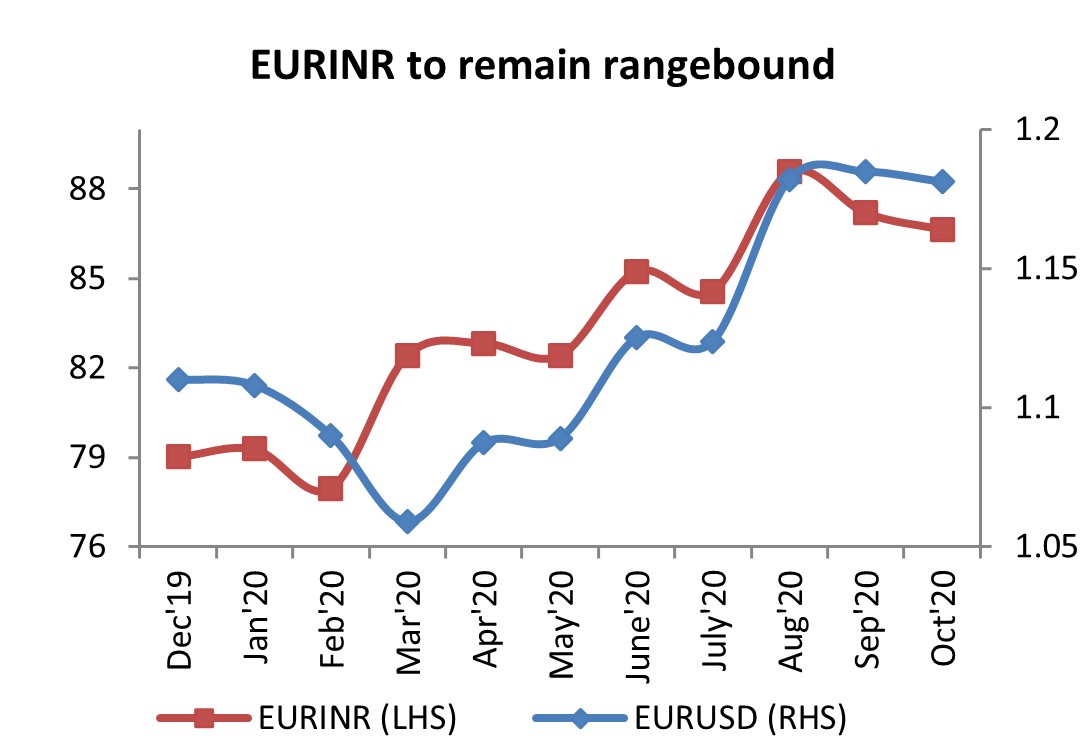 PEPP to remain in focus to aid the ailing EU

In the latest ECB monetary policy meeting, the committee decided to keep interest rates unchanged and stimulus package also to provide support to the pandemic hit nations within the bloc.

Along with the monetary package, Christine Lagarde has urged fiscal policymakers to continue to spend heavily to aid the bloc’s economic recovery from its pandemic induced recession. However, with debt levels rising beyond 100 per cent of GDP for the year, concerns are rising whether the Governments will be able to push to through more support and subsidies, raising the risk that unemployment and income schemes could abruptly end.

However, despite all the efforts economic recovery in the euro area remains incomplete, uncertain and uneven according to the Central Bank and is likely to get affected more on account rising cases of Covid-19.

US daily number of coronavirus cases had dropped significantly from its peak of 50,000 cases per day to 30000 cases per day. But since the start of September daily cases in the US are again peaking at 50000 cases. A similar story of the second wave of cases can also be experienced in most parts of EU especially in Spain and France.

Meanwhile, US FED has been supporting the economy with an ultra-loose monetary policy but the second round of fiscal stimulus is highly needed to help the US people and its economy.

US FED in its latest monetary policy meeting affirmed of near-zero interest rates till 2023 and so has been the policy with ECB as well.

Meanwhile, US 10 year Treasury yields have been on a falling spree since the start of the pandemic as investors still remain cautious over the recovery of global economies going forward. US 10 year yields have fallen from pre pandemic levels of 1.684% in Feb’20 to 0.716% in Sep’20.

EURUSD has appreciated by nearly 5 per cent since Aug’20 and the Central bankers too are keeping an eye on the same. However, with hopes of fiscal stimulus from the US Government is likely to keep the appreciation of the pair under check in the coming month.

Technologies for Cardiovascular Disease: A 2023 Appraisal
Seeing Strategically
10 Recommendations On How To Negotiate Outsourcing IT Contracts
Shopping in the Age of ChatGPT: How the New AI Rage is Revolutionizing Retail Experiences and Consumer Goods Manufacturing
How Partnerships with Affiliate Marketing Networks can Amplify Business Gains for the BFSI Sector
Optichannel: Winnable Marketing Strategy for Pharma
CONTACT US