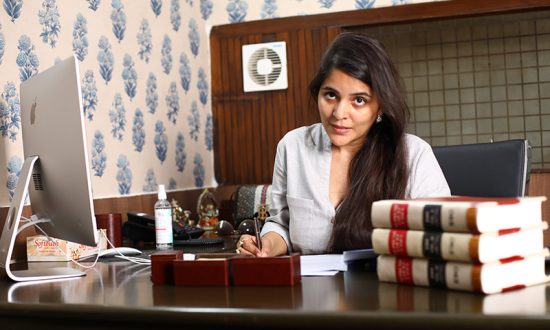 Advocate Ishanee Sharma, Managing Partner, Ishanee Sharma Law Offices is a name to reckon within the legal circles of the country. She is a leading voice of change behind laws achieving gender justice and freedom of speech and is someone who fiercely goes after corporations and governments without a shred of doubt or fear. A writer by choice, a lawyer by profession, an alumni of the National Law School Delhi she practises in the Delhi High Court and is a counsel for the state of Uttar Pradesh in the Supreme Court of India. At her age, when half of the Millenials are still hunting for a cause to be passionate about, Ishanee has founded a rapidly growing law firm, Ishanee Sharma Law Offices.

The pain of the covid waves is slowly subsiding. At the height of the crisis, the governments at all levels were facing very harsh criticism for the mismanagement of the covid situation. However, beneath this visible misfortune that struck our country is the underbelly of the lack of capacity of the Indian State which is a structural and institutional issue. This feature was aptly captured in the paper at the Harvard’s Kennedy School titled, ‘Is India a Flailing State: Detours on the four-lane highway to modernisation’ by noted economist Lant Pritchett wherein he highlighted that despite India’s booming growth in 2009 due to various factors India’s state capacity had not improved to improve governance for impactfully changing the life of the people. This critical failure of the Indian State has now come to haunt us with the health infrastructure of the country in tatters. Blaming the present Government isn’t the right thing to do. The reason for the debacle is decades of the incompetence of subsequent governments. It was like sitting on a fractured structure for years, which could have collapsed on the very first blow. It did.

The Indian governance model envisaged through the Constitution of India makes a robust case for three-tier structures for governance, however, in practice the third tier with respect to health infrastructure was seen wanting for attention in light of the sudden upsurge in Covid Cases. It is the local government which has the ability to negotiate context-specific local conditions and tends to be more responsive towards the general public. There is no denying the fact that the Covid-19 pandemic is a once in a lifetime event and the record outbreak was beyond anticipation, however, an effective and robust last-mile delivery in the health infra would have possibly helped in managing this gigantic crisis better. The Twitter helpline or WhatsApp forwards for help are certainly an advancement in the way the governance has evolved but the same also highlights the story of a broken system.

Although, there is a Union health ministry but under the Constitutional scheme, health is a state subject. At the same time, it is also true that due to greater financial power and support from research and advisory bodies at the Union level, the States are dependent on the Union government for policy and financial support. The state governments should have been better prepared when the Centre was going all out to provide them whatever help they required. The Indian Parliament in the year 1992 brought the 73rd and 74th constitutional amendments which aimed at revolutionising local governance and aimed at achieving the perfect idea of ‘gram swaraj’. The amendments had inserted Part IX and Part IX-A into the constitutional text thereby contemplating the powers, composition and functions of local self-government institutions i.e., the panchayats (for rural areas) and municipalities (for urban areas). Article 40 of the Indian Constitution also gives the power to organise village panchayat. ‘The State shall take steps to organise village panchayats and endow them with such powers and authority as may be necessary to enable them to function as units of self-government.

Through this constitutional change, it was envisaged that greater decentralisation will result in more accountability and the third tier was also given crucial subjects to work on including health. Article 243W and 243G of the Constitution requires State laws to endow the Municipalities and Panchayats ― with such powers and authority as may be necessary to enable them to function as institutions of self-government. The Eleventh and Twelfth Schedule of the Constitution recommends a list of local functions, which states may by law transfer to the 3rd tier governments. Looking closely at the Twelfth Schedule, the words ‘public health’ is mentioned at entry no. 6 and at entry no. 23 in the eleventh schedule again health and sanitation including hospitals, primary health centres and dispensaries are mentioned.

Unfortunately, these provisions have merely remained in the Constitution and effective implementation by the State governments through support from the centre for developing a strong state capacity has remained elusive. This structural issue and governance deficit are what came to haunt us during the waves of the pandemic.

The international best practice from advanced economics also highlights the benefits of empowering local governance. In England, mayors have a very influential role in making health policies for the National Health Service (NHS) and the result of which could be seen in the successful handling of the pandemic in Manchester in providing effective policy answers by being responsive to the public. For example, recently Mayors in England had put enormous pressure on the government to give more financial support for their regions if tighter restrictions were imposed and such a demand was heard by the Central government. The local governance centric model has the benefit of the people reaching out to its local leaders with whom they have familiarity and getting fast and effective solutions.

The second wave of the pandemic just exposed the inefficiencies in our governance structure which were always present. The pandemic provides us with an opportunity to turn things around. Every Indian city is at a different developmental stage and has its own unique cultural, political, and economic characteristics. Therefore, every constituency deserves to have institutions of local governance that can bring about lasting change. A robust health system is imperative for people’s growth and productivity. It is imperative that the third tier of governance is empowered in the true sense with the requisite political, financial and administrative support so as to address the deficit of the State capacity and make India strive forward.

The Prime Minister in his days as the Chief Minister handled the aftermath of the Bhuj earthquake in rebuilding the city through innovative thinking and by empowering local communities. It is truly hoped that the leadership of the day will not let its citizenry down.

Hope is a beautiful thing, maybe the best of things!

Technologies for Cardiovascular Disease: A 2023 Appraisal
Seeing Strategically
10 Recommendations On How To Negotiate Outsourcing IT Contracts
Shopping in the Age of ChatGPT: How the New AI Rage is Revolutionizing Retail Experiences and Consumer Goods Manufacturing
Why Higher Education Will Never be the Same Again
2020 VMware Threat Landscape Report: See What Evaded Perimeter Defenses
CONTACT US