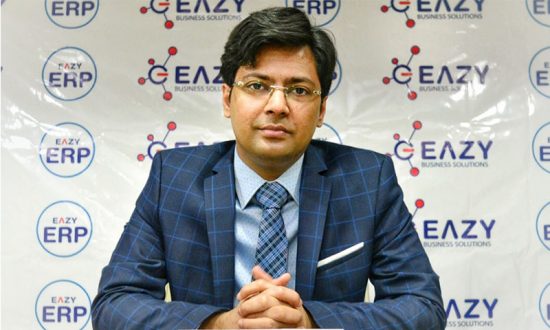 A self-motivated & dynamic entrepreneur, Kunal is a member of the Institute of Chartered Accountants of India. His passion for technology led to the establishment of EAZY ERP in 2007. Apart from oﬃces in India, the company has a presence in Bangladesh, Nigeria, Dubai, Bahrain, Kenya, Saudi Arabia. Kunal has also invested in a startup – FirstCut, which is an app that facilitates auditions online, connects casting agencies, directors & ﬁlm production houses to the app users. He is a sports enthusiast and is passionate about promoting the welfare of girl child in India.

The Indian retail sector, both the organised and unorganised segments are ever-evolving and are set to grow at a rapid pace over the next few years. The Indian retail industry currently ranks as the fifth-largest globally, contributing to about 5% of the nation’s GDP. For a sector which has so much potential for growth and Foreign Direct Investment (FDI), the presence of a robust and efficient distribution and supply chain network is inevitable. Most of the Indian manufacturers use a three-layered selling and distribution structure comprising of the super stockists, wholesalers, distributors and retailers, that has evolved over the years.

With the increase in disposable income in rural India, the introduction of food security bill, direct cash transfer subsidy and other policy support to this sector, rural India has been contributing to more than 45% of the overall FMCG revenue, and this number surges upward. The rural sector dominates the retail industry landscape, and its outreach to the largely untapped rural markets necessitate capacity addition to rural infrastructure and the development of diversified back and front end supply and logistic networks. The National Highways that form about 2% of the total roads in the country carry 40% of the total load, and hence it’s mandatory to improvise their condition. The cost of logistics such as warehousing and transportation cost for a retail chain, as a percentage of the cost of goods sold (COGS), is about 4% or 5%, which is pretty high in India. This can cause few bottlenecks in the growth trajectory of the Indian retail sector, which can be mitigated by an efficient Distribution Management System.

Need for the Distribution Management System

The Indian FMCG industry is characterised by a complex maze of intermediaries and players, including distributors, wholesalers, and retailers, which pose some challenges for the FMCG majors as they plan to increase their coverage for the retail outlets. The organised retail sector comprises of a mix of hypermarkets, supermarkets, gourmet, speciality stores and convenience stores; mainly dominated by large Indian companies. The unorganised retail sector comprises of Kirana stores, convenience stores, streets markets and general stores. The last two decades have seen a technological revolution in the retail and consumer landscape with the arrival of e-commerce. As digitisation has been instrumental in helping the FMCG companies rationalise their operations, India’s digital economy has witnessed unprecedented growth in the last five to six years. Optimisation of risks and costs foster the development of an efficient Distribution Management System (DMS) to help attain retail industry profits.

An efficient DMS entails faster and accurate coordination between the various stakeholders in the retail supply chain, starting from the manufacturers to the wholesalers to distributors, retailers and finally, the customers. Technological interventions like Business Intelligence, Real-time data monitoring and tracking of orders has enabled the retailers to get an update on the stocks, orders and their processing. If the retailers do not use the extensions of DMS, the companies will have to rely on the offline data shared by their distributors at a certain frequency, which is neither real-time nor authentic. An automated distribution system enables the distributor and retailer to maintain focus on their core business operations and sales, which help in reaping business growth by improving productivity, ensuring uninterrupted delivery processes, optimising the supply chain while responding faster to market and customer demands amidst real-time visibility even in the remote places. This also prevents double-counting while maintaining the stock record. Big support to the distributors and the retailer as the DMS and its extension aids in the automation of all kinds of system generated invoicing and intelligent alerts to make their life simple.

The time lag between the various operations is minimised, thereby reducing wastage of perishable commodities in transit, as better coordination is enforced between the different stakeholders. The DMS ensures better production planning to the main company, which reduces wastage of their production resources and setting up a standardised process across the value chain.

The organisations have been leveraging digital technologies to change their customer interface too using predictive intelligence tools like artificial intelligence (AI), to deep dive into understanding the end-customer preferences and offer innovative products. Big Data and analytics have been instrumental in studying the underlying customer buying patterns.

The Indian retail sector currently pegged at $490 bn, is expected to grow at a compounded annual growth rate (CAGR) of 6% to reach $865 bn by 2023, according to a research conducted by Oxford Economics as the total number of retail distribution outlets in the country is estimated to be over 12 million. The Fast Moving Consumer Goods (FMCG) sector is estimated to grow at 11% during the next ten years. The FMCG industry would need a robust distribution management system to optimise the distribution network operations so that risk and costs can be minimised. Also, with the influx of 100%, FDI in the existing businesses of eCommerce companies in India, the Indian Business to Business (B2B) eCommerce sector is estimated to reach $700 bn by the end of 2020. The Indian e-commerce retail sales are expected to surpass $120 bn by the end of 2020 from $30 bn in 2016, as the concept of online retail becomes more prevalent in the next five years. With increased penetration of the digital wave and a wide-spread distribution management network, India is likely to become the world’s fastest-growing e-commerce market, driven by robust investment in the sector and the organised retail sector growth at a CAGR of 20-25% per year.

Why Leveraging Data in the Digital Age is Crucial to Business Success
Say Hello to an Emerging Breed of Independent, Resilient Women Entrepreneurs
How Mapping Technology Can Transform The Global Urban Landscape
Five Ways to Foster a Cybersecurity Work Culture
The Significance of Product Engineering Services in the Constantly Evolving High-End Tech Environment
Next Big Changes Waiting to Happen in EdTech Platforms in 2021
CONTACT US