Evolution of Rugs and Carpets 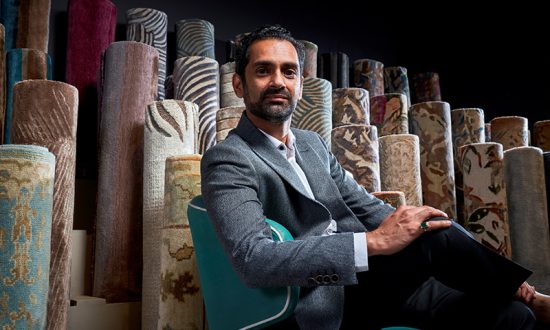 Chetan Mathur is a growth-driven entrepreneur with a vision for the future. Born and brought up in South Delhi, Chetan specialized in International Marketing from IIPM and started his career with Indian Oil Corporation as an intern. He has more than 20 years of expertise managing supply chains for multinational fashion and home décor businesses and retailers. Sustainable Sourcing Strategies, Supply Chain Management, International Marketing, and Operations are his areas of expertise. Chetan is a Wharton University certified professional in Strategic Management. He is well known for his women empowerment and employment generation endeavors, in the Indian business arena. Since his younger days, Chetan has been an audiophile and enjoys travelling to different countries, appreciate their cultures and heritage.

Humans have always desired to focus themselves around comfort, from the period when cave dwellers used to live in caves until the present day. Individuals from several tribes braided grasses and plant fibres together in the past to make a cosy and warm sitting space during cold weather. Animal skins were used as a source of comfort by nomads a few thousand years later.

Carpets are said to have been widely used during the Mesopotamian and Egyptian periods. Pazyryk is the oldest carpet that has ever been manufactured. The first carpets are thought to have originated in Iran or Turkey, although they were really created in Armenia in the 7th century. This occurred about the year 400 BC. The Pazyryk rug was the very first to have a pile. To increase the pile height of the rug, the fibers were left free and knotted together.

Rug making did not begin in India until the 12th century. It took shape from there and grew in size as it moved east. The skill of rug manufacturing eventually made its way to Sri Lanka. Those rugs were later brought to Europe by a group of warriors on their way to the Middle East. During the 13th century, Arabs in the southern part of Spain were the first to introduce hand-knotted carpets to Europe. Thereafter, the art moved to France, where multiple factories were set up.

It was only until the 14th and 15th centuries in Persia that it took on the form of a business. The craftspeople for these Persian carpets were inspired by life in Persia, the grandeur of their customs and traditions, and that is reflected in the majority of these rugs. These rugs were incredibly long-lasting and were passed down through the generations as heirlooms. Rug designs and colours evolved more and more in Persia’s Isfahan, which eventually became the rug industry’s epicentre.

Rug making began to thrive in the sixteenth century. Both Persian and Turkish rugs found their way to Europe during this period. In 1628, France established a rug business. Chaillot was the location. The French weavers learned the craft of weaving from here. This was the era when themes and vibrant colours were introduced into the rug. Tapestries were in full bloom at Aubusson, a little French village. These rugs were manufactured by hand, and the finest quality goods were made with wool as the primary raw material. Carpet weaving was brought to India by the great Mughal Emperor Akbar in the 16th century and is known as Mughal carpets (or Moghul/Mogul carpets). It is said that when Babur came to India, he was disappointed by lack of luxuries here. He missed the luxuries of Persia, which included the Persian carpet.

The weavers quickly worked with the locals and set up workshops. The industry flourished, and the carpet weaving industry in India had been born. Soon rugs of all materials were being produced, the most luxurious of which were made of cashmere, and were made with expensive gold thread and gemstones. Later in the century, animals and decorative florals were featured.

In the 1700s, England gradually became the hub of Europe’s rug-making business. With the debut of power looms in 1780, it flourished even more. Due to its strength, fibre length, and durability, wool was once the only raw material utilized in rug production. The use of silk did not become popular until the late eighteenth century. Silk carpets were used as meditation mats because of their very soft texture.

Rugs were generally flat woven in the nineteenth century because they were more inexpensive to the general public. Hand-knotted carpets, on the other hand, were not something that all parts of society could afford to have in their homes. With an increase in demand for hand-knotted rugs, manufacturing continued to rise as more people desired to beautify their floors with them. People were persuaded by the vibrant colours and exquisite textures. With the popularity of hand-knotted and oriental rugs, demand for English and Italian furniture increased to accent the interior décor of homes.

Machine-made carpets became more popular in the twentieth century as people’s preferences changed. The majority of these carpets had identical designs that were practically monochromatic in colour. For house decorators, the rug’s simplicity in colour and pattern made it simpler to mix it into any type of room. Intricate patterns and design complexity became less popular. As a result, the majority of users found it simple and straightforward.

Beige and purple were the most popular hues at the time. The reason for this – these hues go with any type of room setting, making interior design even easier.

Furthermore, tufting guns were popular in the 1950s. During that period, it was more popular than hand-woven rugs. The United States became the hub for tufting carpets, and it expanded its reach to other parts of the world from there.

The types of colours, patterns, designs, styles, materials, weaving processes, and the list goes on having all been introduced to rug creation over the twenty-first century. This satisfies the needs of varied clients as well as their preferences. Every day, the rug-making process evolves in tandem with the types of furnishings individuals’ desire for their homes.

Rugs are now considered a worthwhile investment. People are becoming increasingly knowledgeable about rugs. From the raw material purchase to the cleaning methods that ensure their priced rug lasts for decades to come.

Modern carpets come in a variety of forms and sizes to fit any area, from a basic living room to a large hotel lobby. There are carpets that may accentuate your child’s artistic abilities and even offer a neutral mood to an otherwise colourful room.

The good news is that handmade carpets bring a sense of consistency to your life. With these carpets, you take a step toward a healthier environment, which is truly needed. Additionally, when it comes to pricing, rugs are available in a variety of price ranges to fit your budget, so becoming sustainable is no longer prohibitively expensive.

Demystifying the Art of Extraordinary Team-building: How To Lead Like a Pro
Digital Healthcare or Virtual Clinics are the Future of Healthcare
The Year That’s Going To Cost Us
How Fintech's are Aiming to be the Digital Push for Rural India
Home Credit India Launches Inaugural Sustainability Country Card – #BeResponsible
Kia India Announces Nationwide ‘Ownership Service Camp’ for its Customers
CONTACT US