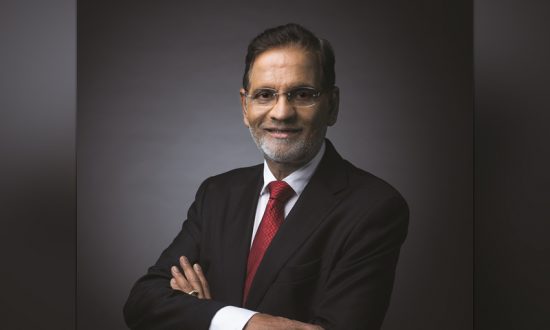 Shreegopal Kabra, a business leader, philanthropist & global entrepreneur often recognized as a trend setter in the industry is the Managing Director and President of RR Global, a 850 Million USD diversified group of industries focusing mainly on infrastructure & electrical solutions spread across 85 countries globally. Besides taking his business to greater heights and building a Global Brand, Mr Kabra serves as the Chairman of the International Copper Association (Wire & Cable Division), Executive Council Member of SAARC Chamber of Commerce, associating at the highest capacity with IEEMA as its Past President as well as shouldering the responsibility as the Former Chairman of Winding Wire Manufacturers Association for fourteen years. Over the years, Mr Kabra’s success has been highlighted by a number of awards, recognitions and felicitations by various bodies and groups from across the world. With a successful empire behind him, Mr Kabra now wants to focus his energy in ensuring electrical equipment, particularly wires and cables are manufactured with the highest quality, and that policies are in place to ensure that only such products are purchased and used which in turn will ensure safety and security of the end user.

Indian wire and cable industry has to embrace global standards. India has been perceived for long as a low tech manufacturing base catering to the lower end of the quality spectrum.  Our feeble efforts on the manufacturing end over the years has only reinforced this belief resulting only in garnering a small share of the Global export potential.      This image is despite the fact that there are small sparks of brilliance in our manufacturing capability displayed by a few players. Our bench mark of catering to the bare minimum of standards and compromising on safety   is costing us dearly.   The result, fatalities that keep occurring every day due fire hazards caused by Electrical short circuits.

The reasons are known to everyone, but no strong steps are being taken either by the Government nor by the manufacturers on their own accord.  Technology in the wire and cable segment has grown by leaps and bounds and there is a desperate need for us to re-calibrate our own norms and standards.

We have cities filled with sky scrapers, homes packed with gadgets and public spaces filled with milling crowds (the pandemic period being an exception). The irony here is that all these structures are wired and powered by obsolete network of wires.

We do not pay any attention to the wires running behind our walls. The Developers are catering to the bare minimum specifications that can just pass the norms. Enforcement of mandatory norms are circumvented, facilities are energised and activated while Safety norms are compromised.

A simple example will help in putting across my view:

Consider a public space (it could be a mall, hospital, hotel or any such equivalent) which is equipped with a Fire Detection & Alarm (FDA) system. In a fire situation, this FDA system is supposed to act as the eyes & ears of the facility (continuous detection of Fire & Smoke) for a minimum period of at least 90-120 minutes for the safe evacuation of all occupants of the facility.  The FDA system at the control room is supposed to monitor the condition of every section/floor/room to direct rescue facilities and the FDA system is to be wired with Low Smoke Zero Halogen insulation and high temperature resistance, in short it should provide circuit integrity.

But it so happens that the owner of the facility has wired the FDA system with ordinary wires that are only PVC insulated and has low temperature resistance due to commercial considerations. In this fire situation, the FDA system becomes ineffective because of the poor quality of wires.

It has failed on two counts, first it is not able to detect & report the impact of the raging fire and second, it also aids the fire as it begins to melt at 70 degrees Centigrade and also produces thick black toxic smoke as it burns.

So instead of being a saviour from fire it succumbs to it.

Who can be held responsible for this accident? Is it the Government for lax standards, the Statutory bodies for poor enforcement or the owner of the facility who compromised safety to earn a few rupees more?

I strongly believe that the Government can make Safety a priority if it focuses on this area.

My belief stems from the fact that when we are capable of executing Metro Rail projects across the country where a world class network of trains run over ground and under the ground in many parts of our nation with absolute safety, why we cannot replicate this aspect in other areas?

How did this happen?

It needed someone like Dr. Sreedharan to take the responsibility of executing the Delhi Metro and the rest is history as they say. He brought in global standards in managing men & materials and ensured that standards were ruthlessly followed with zero tolerance. The result is that successful template is being replicated pan India for all new metro projects.

So it is possible to deliver such solutions if there is a will.

I would prescribe a two-step process to ensure Electrical Safety.

This will help a number of stake holders in multiple ways:

We can replicate our IT success in the Electrical manufacturing too, but we need to refocus.

The Benefits of Artificial Intelligence for your Business
What’s Your Value in 2023?
Transforming the Executive Search Industry & Making an Impact
Bring the Zing – 5 Keys to Powerful Presentations, Briefings, and Meetings
Hyper-Growth for Technology Brands – With the Right MarTech
How Industry Leaders are Adopting Business Practices to Sustain and Grow in the New Normal
CONTACT US