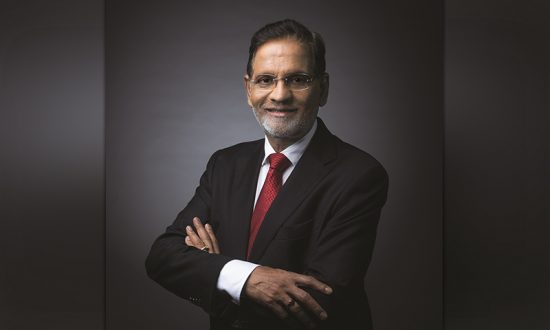 Shreegopal Kabra, a business leader, philanthropist & global entrepreneur often recognized as a trend setter in the industry is the Managing Director and President of RR Global, a 850 Million USD diversified group of industries focusing mainly on infrastructure & electrical solutions spread across 85 countries globally. Besides taking his business to greater heights and building a Global Brand, Mr Kabra serves as the Chairman of the International Copper Association (Wire & Cable Division), Executive Council Member of SAARC Chamber of Commerce, associating at the highest capacity with IEEMA as its Past President as well as shouldering the responsibility as the Former Chairman of Winding Wire Manufacturers Association for fourteen years.

New technology in the Wire segment was non-existent for a long time until the late 1990’s. There are multiple reasons for this low focus on upgrading standards or investing in research & development for taking the industry ahead. We need to go back a few decades to understand the reason for this phenomenon which is unique to our country.

Post-independence, with the roll out of Five year plans, the Government led investment focussed into core sectors.  The manufacturing of electrical related products varying from conductors to transformers to transmission lines were largely dependent on what the British left us a legacy, beginning in the early 1900’s. Most of the standards were British (BS) which later metamorphosed into Indian Standards (IS) to Bureau of India Standards (BIS) as it is known now.

All our standards have its origin in BS. The Wire industry, especially House Wires drew a great from the earlier pattern set during the pre-independence era and continued later in the 70’s & 80’s. India had to depend on imports for Copper & PVC, key raw materials for the manufacture of Wires. Forex was another major worry   in imports and the Government was not too keen on opening its purse for the import of these items unless it was an emergency.

The domestic demand was also not growing at any great pace to justify large scale imports. Along this period, the usage of wires changed from the traditional BS based solid strand to multistrand with PVC insulation. The technology involved here was not anything spectacular giving rise to numerous MSME’s setting up shop to manufacture and cater to the growing domestic demand. Standards were too low with scant regard for any safety. The objective of the unorganised segment was set on short term commercial gains. There were numerous regional manufacturers who were content to play within their limited geography and not look at upgrading their technology.  Frankly there were no pioneering efforts and there was no need as the market too was complacent.

Came liberalisation, the advent of IT revolution drove the urgent need   to upgrade our long pending standards. BIS was not in a position to upgrade standards overnight.  The requirement by the IT industry by default drove changes in standards. Later BIS caught up with the regulations but sadly there was a lack of comprehension in the direction to be taken. Short term measures were looked at upgrading a few parameters   in isolation. The overall impact of standard upgradation was not looked at in a holistic manner and safety was compromised.

In the wire segment in the move to upgrade from PVC insulation we ended up having FRLS  ( Flame Retardant Low Smoke ) which was nothing but modified PVC, where one  ended up spending more for an apparently better product with incremental enhancement in performance.

We need to give prime importance to Electrical Safety and the hazards of fire in our standards. Everyday lives are lost due to electrical related fire accidents which can be avoided if standards are strengthened. This will lead manufacturers to invest in new technology not only to remain competitive but also give value human lives and their safety. We are globally integrated and cannot afford to be seen lacking in the manufacture of products that match international norms. Adoption of international norms like:

are not being valued or considered seriously by the various Government agencies at a time when COP26 change is being debated globally and our Prime Minister was an active proponent at the recently concluded UN Climate Change meet at Glasgow.  He has set high goals for the entire nation and it is time that our Electrical safety norms are changed.

This has to two pronged, where the norms are enforced and implemented across all States. This will bring in a great deal of awareness among the user base and force every manufacturer to invest in better technologies to cater to the revised norms. Today, there only are a handful of players in this segment who are carrying the burden of bringing better products at their own risk while the large chunk of the industry is thriving at the lower end of the quality spectrum. Leading players in the segment and the Government have a responsibility to deliver a electrically safe environment at every sphere of life.

This can happen when investments are made for technology adoption, absorption and the evolution of a eco system that values better products. Investments will follow if the Government follows up on its promise strictly enforcing norms and opens up a larger quality aware market that is not addressed now.  India is in the cusp of transforming its energy sector and the Wire Industry is the net work through which that change will happen with better technology.

The Benefits of Artificial Intelligence for your Business
What’s Your Value in 2023?
Transforming the Executive Search Industry & Making an Impact
Bring the Zing – 5 Keys to Powerful Presentations, Briefings, and Meetings
How an Excellent Service Team can Make Every Customer Happy
The Exhaustion Epidemic Might Wipe Out Your Workforce
CONTACT US