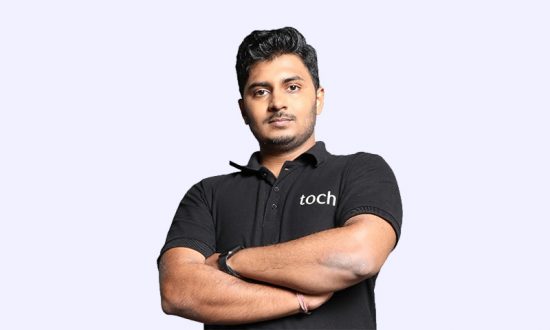 Vinayak spearheads investor management, business and strategic growth, and makes sure that the roadmap of the organization is aligned with the vision. Vinayak has a background in engineering and an MBD from London Business School. He has worked as a Venture Capitalist steering high growth startups towards profitability. Having worked closely within the media sector, he experienced firsthand the slow innovation and adoption of new age technologies in this sector and was inspired to partner with Alok and Saket to create Toch.

One of the key takeaways of the pandemic era has been the human capability to adapt and mould themselves to new challenges. Owing to digital technologies we have witnessed monumental transformations that have helped homosapiens accept and create realities around their lifestyle, ramp up business plans with remote operations models and discover new potentials where every person is a consumer. Although there had already been a significant rise in OTT and streaming services, the pandemic accelerated and proliferated these platforms by manifolds. Tailored solutions were offered based on data analytics, trends, and success of any genre. It simply meant that viewers wanted more, and streaming partners had to quickly develop and adapt to cater to their eclectic demands. To be able to cater to the voracious content appetite, there was a pressing need for mergers and collaborations between media brands and technology providers to offer solutions that would positively impact ROI and also be engaging and user friendly without disrupting the existing workflow.

The rise of AI

Drastic times call for ‘smart measures. AI and ML based deep learning algorithms are being integrated into operations to enormously reduce the time and human effort that previously went into post-production video editing. AI solutions meticulously streamline operations, making the final product cost efficient with an increased ROI. A disruptive video technology that automates the workflow, abating the go-to-market time, preempting consumer predilections and offering personalised solutions is the dire need of the hour both in terms of consumer engagement and fan engagement. Customer loyalty cannot be taken as a given, but with the changing landscape of consumer driven content, meeting their eclectic demands is pivotal to grasping their faltering attention.

An average consumer is prudent, smart and extremely discernable. A cookie cutter solution will never suffice to satiate and retain a viewer especially with stiff competition in the race for loyalty. Intelligible and niche genres that are personalised more like a buffet of content on the OTT and streaming platforms have garnered some noteworthy success. Also acknowledging the fact that human attention has shrunk and their demands have increased, there is an equal hankering for both bite-sized videos and long-form videos For the sake of reference, as a consumer I would watch a match with friends over some drinks and chatter as a good investment of my valuable time and to unwind. While at other times, I might prefer watching key highlights of the match, or a bite-sized video of my favourite player for a quick update and to stay in touch with what’s happening.

For the love of the game

Sports has unarguably always been a binding factor that transcends borders creating congruence and affinity. Professional sports have a very high level of engagement, also increasing the number of stakeholders, characterising a broader ecosystem that is dependent on media, technology, sponsors, and partners. We have been witnessing more silent mergers between sports and technology because consumers want more than just a game delivered on linear television Their involvement and emotional affiliation with the players demands a more intrinsic viewing experience that can only be fulfilled with the involvement and application of new age technology. Meanwhile technologies such as wearable devices, big data analytics, social media and sensor technology oblige with statistics on athletes, their training, nutrition, biometrics in real time, performance analysis, fan engagement, popularity etc. Every data and analysis is a valued attribute of the AI and ML based deep learning algorithm making each consumer a pivotal part of every dimension of sports. Technology in sports also predicts viewer engagement which is significantly consequential for the teams, investors, brands and the media industry on the whole.

Sports being a gigantic part of the consumable content, there has been a steady surge in funding for the sports market influenced by the social behaviour of consumers and   athletes especially with the current social media exposure. The key areas where technology is rampantly used and is growing to be a major asset is sports data and analytics. In my experience this is the top most driving factor in the ecosystem simply because it brings forth the numbers needed for the competitive advantage, game performance of every player, market segment and fan engagement. The impact of technology is also significant in the media explosion where streaming platforms, OTT platforms, social media are creating user-generated content by inserting slates, ad insertions, adding captions, highlighting key moments, while creating new assets from existing feeds. For instance, comparing an athlete’s older performance with the current one from the data analysis in real time gives an interesting purview of the athlete’s performance curve, records and highlights of the career.  it

The story so far

Sometime in the 90’s the speed serve technology was introduced in The Wimbledon, which not only helped the players in analysing and improving their performance, but also added an extra appeal for the spectators. Similarly, the Decision Review System (DRS) inducted in 2008 in cricket helped umpires review their decisions. Athlete Sensors introduced in 2016 across multiple sports gave athlete biometrics, the vitals during play, injury prevention, athlete fatigue and field position. Today in 2022, AI that is a personification of human intelligence enabled with speech recognition and audio detection is utilised to gather insights on the audience’s emotions. Athletes would be able to live stream their performance or training sessions with their fans using AI based technology, where the algorithm assesses the athlete’s performance based on training and post- match analysis, projecting progress and key areas of improvement.

In recent times there have been collaborations between technology providers offering end to end solutions to media and entertainment companies creating a viable ecosystem for both source (in terms of ROI) and end (enhanced user experience and value for money.) The use of AI in venues is likely to gain traction, the face recognition, audio detection, speech recognition technology would be able to secure the stadiums with smart ticketing, employment of drone cameras and even virtual umpires. An important fact that I have observed is the engagement of the younger generation through non-traditional media and the growing demand for interactive content. We will likely see a shift in sports communications soon aimed at diversifying and engaging new audiences.

Broadcasters have been adapting to the cloud culture to streamline, manage, create new assets through video editing and build a relationship with the consumer through data. There is an imminent need of an ecosystem for sustainable content creation, management, digitisation and monetisation’s through a systemised integration. Here are my two cents on how I see this ecosystem evolve; Firstly, it is imperative to understand and champion the media and broadcasting landscape, as this gives a clear steering towards a cohesive relationship between the brand, the consumer, and the media. Secondly, the merger between technology and media will help bridge any gap with regards to product or service, thereby creating a steadfast ecosystem.

What Aspects Should you Consider to Start a Business Today?
The Digital Revolution is Changing the Landscape of the Healthcare Sector
CEO’s Dilemma: How to Reduce Organizational Innovation’s ‘Knowing-Doing’ Gap?
The Veteran Renaissance
Trends That Will Shape the Gig Economy in 2022
The Importance of Upskilling blue-collar Workers to Improve their Employability
CONTACT US