Since the inception of August GBPUSD has declined by 1.54 percent and GBPINR has appreciated by 3.3 percent on account of rising coronavirus cases in UK and brexit related tensions between EU and UK. Possibility of a negative interest rate scenario hinted by BOE Governor Bailey also contributed to the fall in Pound.

Second wave of coronavirus has grappled the UK with 4044 new cases on 28th Sep 2020. Since the start of september UK has been posting nearly 4000 cases everyday. Meanwhile, British health minister Matt hancock announced that they will be introdcuing further legal restrictions due to sharp increase in the number of coronavirus cases in northeastern England. 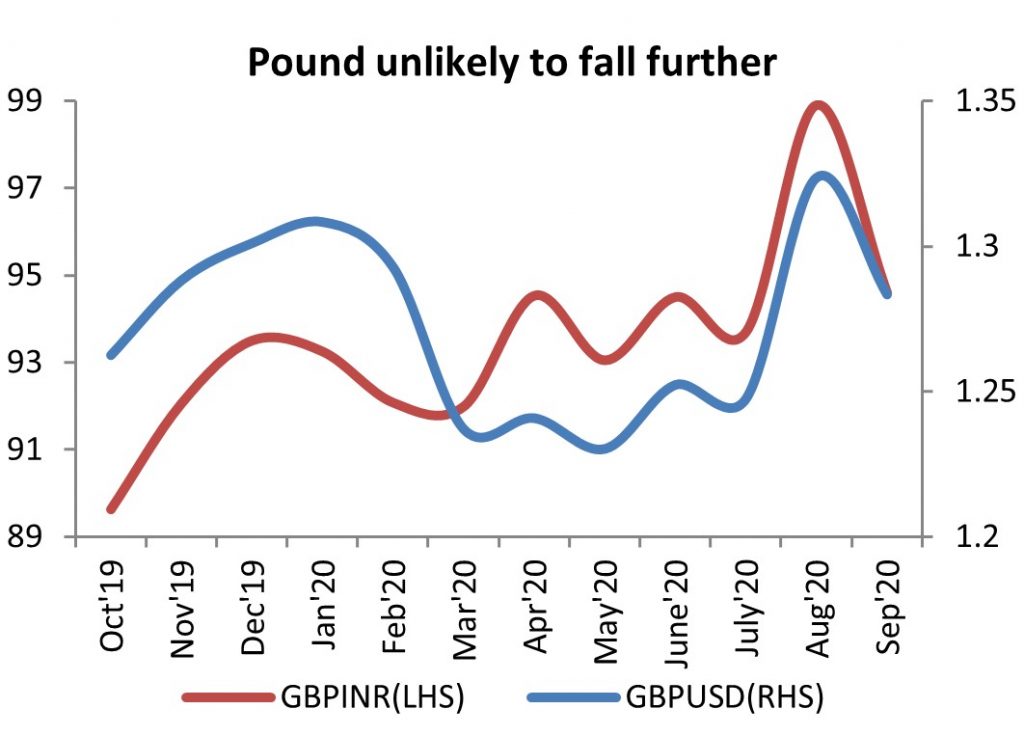 UK’s GDP contraction was by far the highest among its developed economy peers.

UK and EU will be holding their 9th and final round of Brexit talks, according to market reports both sides continue to remain optimistic of reaching some kind of deal before the important EU summit in mid-October.

However, the two main obstacles to an agreement remain deciding which of the EU’s state aid rules will have UK have to follow after leaving and what access fishing boats from the bloc will have to British waters. The Internal Market Bill only added tensions between the two sides. The Internal Market Bill tends to violate some of the previous agreements UK made when it left the EU.

BOE likely to increase its bond buyback program in Nov’20

Policy makers are expected to expand their bond buyback program in November. The Governor said that the economy remains 7-10 percent smaller than it was before the crisis.

The controversial Internal market bill got approved in the House of Commons and now will be passed to the House of Lords for its approval. The bill seeks to protect free trade between Britain’s four nations once the Brexit transition period ends but the bill has soured relationships between EU and UK.

However, if a deal is reached between the two parties then powers on the Irish border solution may not be needed.

Andrew Bailey earlier had hinted at negative interest rates but later played down the cards for that move. With interest rates staying positive for time being Pound is unlikely to slide any further.

But with a second wave of coronavirus cases in UK and lockdowns announced in certain parts of the nation recovery is likely to remain in check.

The Future of Work: The 3 W’s that Matter
Nitric Oxide: The Future of Medicine
Scale Your Heart
Channelising fear in a constructive way: Tools to face difficult situations
How to Unleash the Potential of Advertising on OTT Platforms
Why the BFSI Segment Needs to Beef Up its Cyber Security Infrastructure
CONTACT US