Home /EXPERTS' OPINION/The Bottom of the Pyramid: The Core for Attaining a $5 Trillion Economy

The Bottom of the Pyramid: The Core for Attaining a $5 Trillion Economy 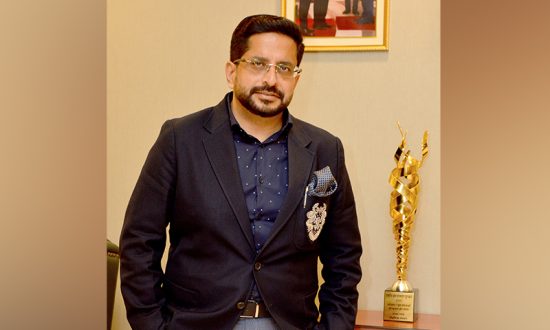 Dr. Prashant Bhalla, President of the Manav Rachna Educational Institutions (MREI) – one of the leading Institutions of secondary and higher education in India, is a young, dynamic leader spearheading the quest for Quality Education. Under his leadership, MREI has evolved into a global-level institution in its 25-year sojourn. A man of fortitude, far sight and fervor, Dr. Prashant Bhalla holds a Doctoral & Management Degree in International Business. With the reins of Manav Rachna Educational Institutions (MREI) in his hands as the person at the helms, he strives to sustain the brilliance of the founder visionary of Manav Rachna – Dr. O.P. Bhalla. As the President of MREI, he has been instrumental in bringing the alchemy of Education and Entrepreneurship together, and scaling the group to heights hitherto unforeseen. Besides the education sector, Dr. Bhalla is engaged in many philanthropic activities.

“Rural development by empowering India’s villages is critical to realizing the dream of ‘Aatmanirbhar Bharat,'” said Union Home Minister and Minister of Co-operation, Amit Shah, emphasizing the importance of rural strength and how training has become increasingly clear as a key tool in the fight against poverty.

According to a Financial Express report, by 2024-25, India hopes to have a $5 trillion economy. To get there, India must grow at a real-terms rate of 9% per year between FY20 and FY25. Rural economies account for 25–30% of GDP. Agriculture used to be the primary source of revenue and employment in rural regions, but the non-farm economy has surpassed it.

To end poverty, education and training are now more important than ever, especially for those at the bottom of the pyramid (BOP) group. Education is required for the BOP group to enhance the quality of life, boost literacy rates, and encourage proactivity and self-control. Additionally, education is essential for a country’s success in terms of its social, cultural, and economic development. Whereas, alongside the Prime Minister’s $5 trillion economic aims, training is being provided to increase the quality of skills in rural India’s youth force.

The BOP group in India comprises of low-income families living paycheck to paycheck or in an unstable rural setting where there is no employment stability, and future aspirations are restricted to a single geographical region. BOP segment has been the focus for many marketing activities in terms of selling items to them in large quantities. This idea may be used to educate the nation’s general populace as well as to sell goods and services and generate impressive profits.

Education may also be considered a game-changer to fulfill the Prime Minister’s objective for the country by the fiscal year 2024–25, a fully realized reality. Urban regions will play a significant role in the eventual transformation of India into an “atmanirbhar” state. Local action is the first step toward global action, and the nation is now just moving in that right direction.

The labour and agricultural reforms undertaken by his government in the last couple of months will help increase growth and returns in the manufacturing and agriculture sectors besides sending positive signals to the world about India’s intent. PM Modi in an interview also said that India as a nation is optimistic of the future, of reaching the $5 trillion target. With this confidence we will try and run faster in the next year to make up for the loss cause by the pandemic. The $5 trillion target will help us become the third largest in terms of current US dollar prices as well.

Challenges to be faced

Rural India has distinct characteristics that must be considered; for example, one of the major challenges in tier 3 and other smaller cities is a complete lack of exposure to industrial culture among both children and educators. Educating kids is a monumental effort that necessitates the use of innovative ways.

In the past, India has approached a variety of issues deftly and imaginatively to find solutions to complicated challenges that caused a commotion in the BOP group’s everyday lives. Education has always been one of the most valuable resources in the fight against these challenges. In the upcoming years, promoting education must be a top priority. This must be comparable to programs like “Padhe Bharat,” by the Ministry of Education, a 100-day reading campaign that asks “young friends” to share their reading lists. Such programs will improve language proficiency and develop a culture of constructive reading and writing.

BOP groups should receive an education beyond sales revenue to enable India’s population to produce more dazzling minds and achieve even higher economic heights. The National Education Policy (NEP) 2020 states that education is a requirement that should be available in even the most rural and distant locations. The Socio-Economically Disadvantaged Groups (SEDGs) paper, calls on the government to provide these areas with the appropriate consideration and incentives in the future. BOP groups are bound to be a driving factor but require a lot of support in terms of infrastructure, quality of education, and adequate teaching methods.

Enhancing the quality of education

Students today have a wide range of opportunities to study and develop. Many rural students now have it easier because of internet schooling in the post-COVID age of education. Online lessons are so convenient, skipping school is no longer an option.

According to a Financial Express Economic Survey, the availability of smartphones climbed from 36.5 percent in 2018 to 67.6 percent in 2021, and lower-grade students found it more challenging to complete online tasks than their higher-grade counterparts.

Children encountered obstacles such as the lack of smartphones and network or connectivity concerns. To address these issues, the Ministry of Electronics and Information Technology’s Digital India initiative has completely transformed the country with its programs. India now has 123 crore Aadhar cards, 120 crore active mobile connections, 49 crore internet subscriptions, and a network of 3.12 lakh common service centers. Providing rural youth with a wealth of possibilities for exploring their options for making a difference in the world is important.

To offer rural India a great education that leads to a quality life, filled with goals and aspirations, responsible authorities and educational institutions must face these difficulties head-on. Rural India has emerged as the key route to the Prime Minister’s $5 trillion economic plan.

Are we ready for this?

In the past, India has been successful in raising awareness among its people about several challenges that have been creatively resolved; the Indian polio campaign is one of the most effective efforts worldwide. Since 2014, India has been proclaimed polio-free and the disease has been eliminated nationwide.

Education and the accessibility of vaccinations were the key drivers in achieving such a remarkable success. Education needs to be given more credit since the country’s citizens can’t be assisted unless the populace knows what the antidote is about.

The nation is generally headed in the right direction. India has generated brilliant minds throughout the 20th and 21st centuries and has consistently come up with original solutions to problems. The current rate of rural literacy in India is 73 percent, according to the India Brand Equity Foundation (IBEF). In India’s rural areas, 81 percent of men and 65 percent of women are literate. Literacy in rural areas is crucial for the Indian economy because it now accounts for 25–30% of the GDP of the nation.

All of nation’s citizens and leaders must come together and cooperate to work in the direction of making it a great nation. Nothing accelerates a country’s development more than its citizens, regardless of ethnic or racial diversity.

Prime Minister NarendraModi’s vision of making India a $5 trillion economy and a global economic powerhouse by 2024-25 is “challenging” but “realisable”, as more reforms are being made according to the Finance Minister. NirmalaSitharamanhas also emphasised that a $5 trillion economy will make India a global economic powerhouse moving it from the 7th to 3rd position in terms of current dollar exchange rate.

As a nation who believes in educating people and investing in education, no targets are unachievable if the focus is maintained, we can be confident that the Indian economy will soon be a $5 Trillion Economy.

Technologies for Cardiovascular Disease: A 2023 Appraisal
Seeing Strategically
10 Recommendations On How To Negotiate Outsourcing IT Contracts
Shopping in the Age of ChatGPT: How the New AI Rage is Revolutionizing Retail Experiences and Consumer Goods Manufacturing
How can Innovation Drive Sustainable Development?
Business Planning Solutions for the Longevity of SMBs
CONTACT US