Why Brand Safety is an Immediate Concern in India?

Amit Relan is the Director and co-founder at mFilterIt, recently recognized as the Top Ad Fraud Prevention Tool for 2020 globally. What fuels Amit is his passion to safeguard brands while also bridging the trust deficit which exists among stakeholders in digital advertising.  Amit is a man on a mission – with the objective of making mFilterIt an ambassador of ‘Brand India’ and ‘Atma Nirbhar Bharat’. He has acquired a legacy of global vision from his decade long tenure of working with tech giants like Nokia and Siemens.

For digital marketers it’s a great news that our Internet users are increasing and at the same time have broadband access where they can consume a lot of content as well as immersive ads.  So, not only textual simple ads can be served, brands can serve video and other rich multimedia ads also.

In 2016, when the widespread uptake of cellular broadband started in India after Jio commercially launched 4G LTE services, other operators like airtel and Vodafone were pushed to quickly launch 4G services.  We saw many redefining moments in telecom since the entry of Jio. 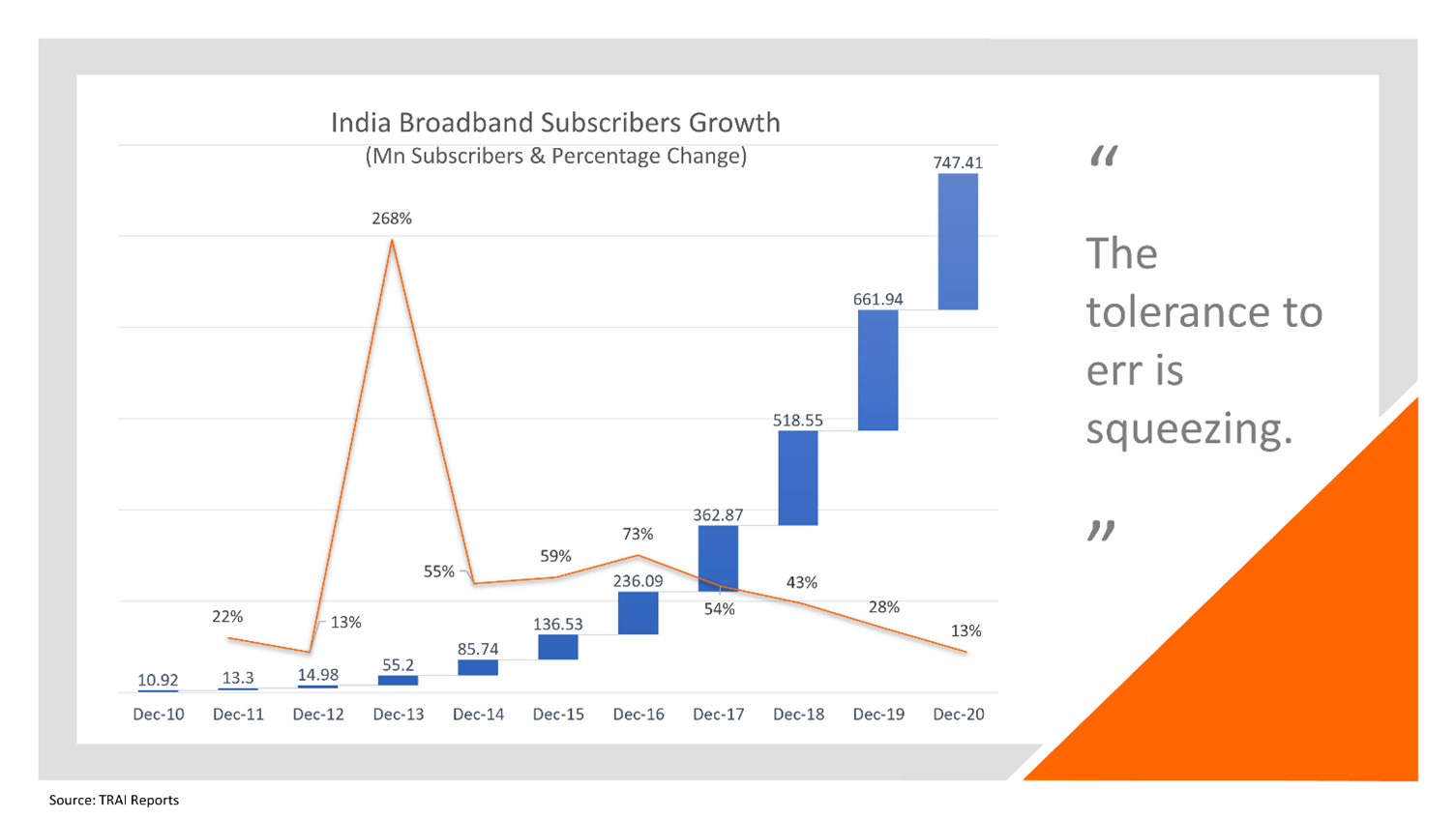 But what is a matter of concern is we are adding up new subscribers at a declining growth rate.  For instance, in 2017 we added 54% new broadband subscribers while fell to 13% in 2020.  This is an expected behaviour as we are achieving complete coverage of the population in India through digital services.

For digital advertising there is an important implication to understand.  Somewhere, we are okay to have inefficiencies in digital campaigns.  Generally, we would make a mass outreach and expect certain industry norms based engagement rate. Many marketers are fine with 2-3% CTR, which means for every 100 people reached, we expect a tangible outcome only from 2-3 people.

Now with this approach, we could afford the churn.  Most likely, as 97-98% would not engage beyond a point, it would also hide the BOT engagement.  Hence, ad-fraud.  Similarly, if anyone in the audience would not engage because of any brand safety issue noticed, it would not make much a difference earlier.  The reason being, there was still a lot of audience available in subsequent campaigns with the overall digital user base growing in India.

But now, this place is saturating, and we don’t have much room left to add more new users.  This means every time a campaign would be served to more or less the same audience.  In this case, achieving highest degree of Brand Safety with campaigns becomes very important.  This will ensure that the audience being served with campaigns does not form a wrong perception about the brand which will discourage and disinterest them from engaging in future.

Even though there is some degree of target marketing using digital mediums, a lot of it still happens through hit and trial and experimentation.  This means a campaign manager has to reach out to same profile many a times with different products and services to gauge the interest beyond as may be defined by key profile parameters.  For instance, a specific audience profile might not be interested in a smartphone campaign but may be extremely interested in a TWS earbud campaign.  While at the broader level the campaign audience remains the same, results of the campaign could differ remarkably.

For such instances, an advertiser cannot afford to lose a user basis any distasteful experience that primarily results out of a brand safety issue.  With the potential digital users hitting a plateau, there is little chance for any advertiser to widen the reach beyond a certain point.  It has to nurture its audience without fail and keep them receptive to its campaigns always.  The relevancy of the campaign may go high or low depending on other factors that are not defined by the profile.  What is important is that the advertiser’s message is received positively and engaged further by a potential buyer to decide accordingly.

Advertisers and their agencies, have to realise this importance of brand safety, especially when new addition to the digital user base is diminishing.  They have to jointly ensure that the advertisement elements and the mediums through which they are delivered are brand safe and do not result in an experience which pushes even a genuine user to discontinue with the campaigns as its positioning is negatively impacted owing to brand safety issues like using an inappropriate keyword, insensitive messaging, false promise, or many such cases that panic a brand’s reputation.

The digital user base in India will not grow as before giving any advertiser lesser opportunities to get new users to engage every time.  They will have to nurture the same set of people and cannot afford to go wrong by creating a bad impression. Earlier, inefficiencies or wrongs in a campaign were offset by target a fresh set of users. Now every advertiser and its partner have to be mindful of nurturing the community in a very clean and pure environment. That the new hygiene!

Technologies for Cardiovascular Disease: A 2023 Appraisal
Seeing Strategically
10 Recommendations On How To Negotiate Outsourcing IT Contracts
Shopping in the Age of ChatGPT: How the New AI Rage is Revolutionizing Retail Experiences and Consumer Goods Manufacturing
GenZ’s Immersion in Technology and the Change It will Bring in Their Lives
Why Every Product Startup’s First Focus Should Be a Great Supply Chain?
CONTACT US