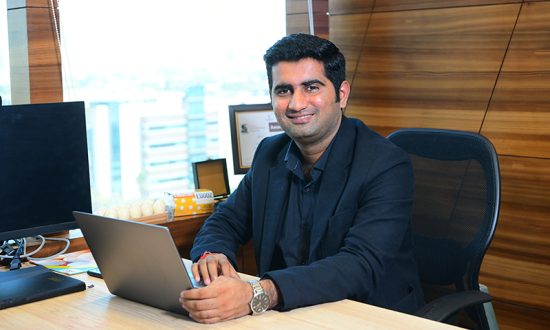 Aditya Singh is an alumnus of the prestigious Indian Institute of Technology, Kharagpur. After getting his engineering degree in 2014, Joined OYO Rooms in its early days. As Expansion Manager, launched key markets for OYO and worked in the Core team for the launch of its flagship and Townhouse Model across PAN India. Currently, he is one of the founders of Eggoz Nutrition.

Almost 60 percent of the Indian rural households depend on farming, and it makes the country an agrarian society. The agriculture sector, comprising mostly of small and marginal farmers, contributes about 20 percent to the country’s gross value added. Market researches indicate that this sector has the potential of growing to approximately $24 billion by 2025 from $204 million at present.

However, major menaces like pollution and climate change have made the future of the agricultural sector increasingly volatile. According to the data by World Health Organization, there are almost 815 million people starving across the globe and one out of every three people is already malnourished. Thereby, the immediate need of the hour is to scale up food production in a sustainable manner.

Sustainable development goals (SDGs) chalked out by the Food and Agriculture Organization of the United Nations (UN) aims at eliminating hunger completely by the end of 2030. To meet this SDG, the Agri-tech companies can play a major role and be a game changer by induction of cutting-edge technologies and innovation to help the farmers. Agri-tech innovators across the globe have been working extensively to figure out how more food can be produced in less time with fewer resources through developments in technologies.

In layman’s terms, Agri-tech can be broadly defined as the application of technology to make farming more efficient and productive by effectively monitoring the field and the food supply chain. More than just profitability, it is about the future of farming where increase in productivity will be the key to maintain sustainability. Apart from supporting farmers to increase productivity, the Agri-tech companies also extend support throughout all stages of the food supply chain, automate processes, create connectivity and provide streamlined systems and solutions.

Innovations in the Agri-tech sector cover all aspects of advanced farming from simpler things like tractors, combine harvesters and milking machines to application of cutting-edge technologies like Artificial Intelligence (AI), robotics or gene-edited organism. The three general trends of the agricultural technology include technologies that produce differently using new techniques, technologies that bring food production to consumers while increasing efficiency in the food supply chain and technology & applications that cross industries. Another major area of focus for researchers in the Agri-tech sector is robotics – which is expected to bring in a future of precision agriculture.

Steady decrease in the agricultural land due to increasing pollution, small and fragmented land holdings, poor quality of seeds, lack of mechanization, lack of analytics and data, low yield per unit crop, reliance on middlemen, etc., are some of the few major challenges that India needs to address. Other challenges include absence of unified physical marketplaces, inadequate transportation and storage facilities, existence of malpractices in the unorganized markets, scarcity of organized credit and lack of visibility in terms of pricing, etc.

Though Agri-tech startups are leading the way to bring the agricultural revolution in the country, there is still a lot that is yet to be done. The country will have to quickly match up with the globally applied technologies like hydroponics, drones, internet of things (IoT), artificial intelligence (AI), robotics, big data and vertical farming, to enhance production in a shorter time span. However, with more and more startups exploring the field, India is soon to overcome its primary afflictions like the lack of globally used technologies, analytics and data, mechanized farming, state-of-the-art R&D, etc.

Till recently not much focus has been put on the application of agricultural technology and the Agri-tech startups have a major scope to exploit the opportunity to advance farming in a country with vast agricultural lands. Indian startups are working on a plethora of initiatives, from offering micro to macro level services to bring in the impending Agri-tech revolution in the country. From on-ground assistance like soil analysis, to using technologies to forecast environmental effects using satellite images, Agri-tech players are continuing to research and innovate to bring in a fast-paced transition. The primary focus has been to transform the way agriculture in done traditionally across all stages of the value chain.

Agri-tech players are also helping the farmers in the distribution phase by researching ways to integrate the physical market with digital platforms through e-marketplaces. This will facilitate the farmers with the opportunity to sell their products online without a physical presence, mostly by providing value added services, quality standardization and secure means of payment.

With the agricultural technology sector growing rapidly, other sectors have also been seeking advancements in the traditional ways of farming. There have been efforts put by the farm input segment to enable adoption and blending of technology in the physical infrastructure to provide farm inputs at best prices. Major players in the financial services sector have been assisting almost 30 percent of the farmer households through allowing greater access to credit, and 65 percent of farmer families by access to crop insurance.

The Agri-tech transformation, led by the startups, is also evident in the poultry sector, where researchers are simplifying the organic egg farming in the country. Agri-tech startups are providing technical supports and training to the poultry farmers on how to run the farm in simpler and more productive manner. With the application of new-age technologies like utilization of IoT and other technical platforms, Agri-tech researchers are working directly with the farmers to guarantee production of high-quality natural food. There have also been researches on applications of virtual reality with factory-based robotics in poultry processing operations.

Papa Kehte Hain… Financial Lessons From My Dad
How Banks Can Lend Faster, Smarter And More To Scale-Up Businesses
How Are Legacy Brands Combining Their Leadership With The New Age Leaders To Create A Successful Business
Innovation Is An Act Of Leadership In Fintech And Banking
CENTA® Partners With The CCS Dharampal Fellowship Program To Upskill Educators In India
Career Lifecycle Management Startup GENLEAP Launches GenDiscover, world’s First DNA Based Self-Discovery Product, in India, Set to Change a Billion Lives
CONTACT US