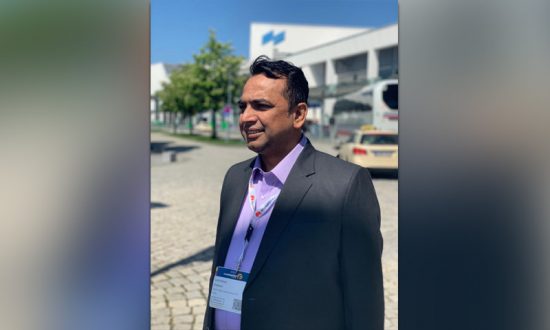 Sachidanand Upadhyay is the Founder of Lord’s Mark Industries Pvt Ltd . He is an engineer by qualification from IME Mumbai having a wide experience in the field of Marketing and sales.He started his career with Ion exchange India LTD launching brand Zero B puripavk rise to create a huge distribution network across india.Heading Marketing Division for Shah group paper Division created an epic for distribution and supply of environment friendly bamboo free paper. Mr Sachidanand Upadhayay was very instrumental In printing recycled paper to all Government departments to support and promote recycled paper. He was also instrumental with the promotion of the Balbharti concept with the Government of India advised to distribute free text books to poor students to promote Right to education.

The Sustainable Development Goals (SDGs) or global goals drawn up by the United Nations General Assembly (UNGA) in 2015 have been perceived as a definitive roadmap to ensure a sustainable planet for all human beings. A key part of the SDGs has been Goal 13 which urges signatories to take emergency action to mitigate the adverse impact of climate change on ecosystems and biodiversities. Extreme climate fluctuations and changing weather patterns is leading to the depletion of fresh water bodies and severely impacting agricultural productivity alongwith lowering the nutritional quality of food. India alongwith 196 other countries has signed and endorsed the Paris Climate Agreement. India has also been one of the few signatories to the Accord to have achieved the distinction of being on track to meet its target of realizing 21% of its pledge to lower emissions intensity of GDP by 33-35% by 2030.

As part of a global collective initiative to combat the risk severity of climate change, to enhance resilience to rising temperatures and ensure global peaking of greenhouse gas emissions, India is in plans to rapidly transition to Electric Vehicles (EVs) from automobiles with conventional fuel systems. The government is implementing the right policy framework to ensure that electric vehicles account for 30% of total vehicle sales in the country by 2030. The mass roll-out and acceptance of EVs presents key economic and environmental benefits for emerging economies like India.

For a country which is the second largest net importer of crude oil and its products in the world after China, EV adoption on a large scale can lead to exponential savings on its crude import bill and improve its foreign exchange reserves. A report by the Council on Energy, Environment and Water, a New Delhi-based think tank has estimated that the transition to EVs could lead to savings in crude oil imports worth Rs 1.07,566 crore. The retail consumer would also not need to worry about the impact of fluctuations in daily petrol and diesel prices on his fuel bill. On the environmental front, enhancing the share of EVs can lay the groundwork for a smart and sustainable transport infrastructure in the country. It will not only improve air quality in the country’s towns and cities but also help in reducing India’s carbon footprint and accelerate its shift towards becoming a carbon-neutral economy.

The fast-paced roll-out and acceptance of EVs in India is easier said than done. The concept of EVs in the country is still at a nascent stage. Having said that, India’s transition to setting up a robust EV infrastructure has taken a good start. Policy makers and the common man have begun to understand and appreciate the basic concept and idea that EVs needs to be a key part of next generation public transport fleets and private transport systems. The wider adoption of EVs is also essential to reduce air pollution, lower the quantum of greenhouse gases to maintain the balance of our fragile ecosystem and thus improve public health. It has been estimated that increased use of hybrid and plug-in vehicles can greatly improve the fuel economy, reduce fuel costs and bring down the level of exhaust emissions.

Several state governments have accelerated the momentum to enhance the acceptance of electric vehicles and develop the charging infrastructure. Policy interventions and measures by the Maharashtra Government like converting 15% of the state transport corporation’s fleet to EVs, 10% of newly registered vehicles to be electric by 2025 and making it imperative for e-commerce and logistics companies to shift 25% of their vehicles to electric holds the potential to fast-pace the penetration of EVs in the state. With state governments across the country announcing increase in subsidies for the purchase of EVs, their price is likely to reduce sharply in the near future enhancing their appeal and acceptability for the general public. India needs to look at EVs not merely as a technology imperative but as a habit to foster a clean and green ecosystem and boost e-mobility.

Setting up of a robust Pan-India EV charging infrastructure is important for facilitating the faster adoption of electric vehicles. The shift by the general consumer towards owning and driving EVs will depend on the easy availability of charging stations at convenient locations and the charging time. A lack of sufficient charging infrastructure in the country could negatively influence consumer purchase behaviour. Building a Pan-India network of charging stations should be the priority focus of the central and state governments as well as other concerned stakeholders. It is an understood fact that the majority of EV purchasers would be from the urban areas.

The government should make it mandatory for residential societies and commercial and office premises to build EV charging stations. As EV charging stations become increasingly accessible and affordable, more number of people will be encouraged to adopt EVs. With electric charging stations using renewable energy to fuel EVs, transport systems can become environment positive and comply with the sustainability initiatives of the government. The government will need to support the setting up of a strong public charging infrastructure through measures like providing tax exemptions, capital subsidies or capital grants.

A draft policy can be formulated by the government to incentivize corporates to pool in their CSR resources towards supporting the building of charging stations. The onus must be on leveraging the expertise and experience of local power companies in developing the EV charging infrastructure. Rolling out a production linked incentive (PLI) scheme with an outlay of 18,000 crore, the Modi government has laid the groundwork to promote the manufacture and storage of lithium-ion cells. This will not only attract fund inflows from global battery manufacturers to set up production facilities in India and position the country as a global hub for the manufacture of electric vehicles. It has also been touted as a key step towards expediting the acceptance of zero-emission electric vehicles on a mass scale.

The development of electric vehicles and charging infrastructure depends on industry-friendly government policy interventions. The common man also needs to be made aware and educated about the long-term financial and ecological benefits of EVs. The government needs to come up with more innovative liquidity and PLI schemes to decarbonize personal and public transportation and promote the mass use of EVs in the country.

The Benefits of Artificial Intelligence for your Business
What’s Your Value in 2023?
Transforming the Executive Search Industry & Making an Impact
Bring the Zing – 5 Keys to Powerful Presentations, Briefings, and Meetings
Mobile Advertising is Changing the Landscape of Advertising Sector
Small Scale Business Chatbots: Let’s Chat-A-Bot It
CONTACT US