Offering Airline Hospitality and Star Hotel Features in a Cab 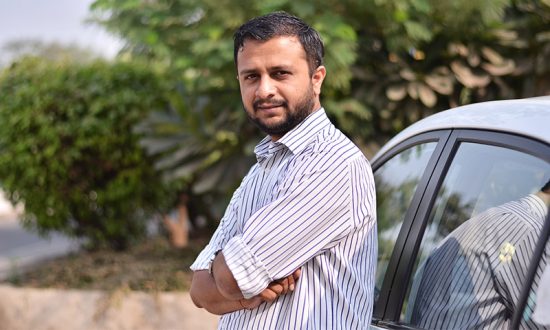 A driver with lousy behaviour coming late in his poor-quality car is an everyday ordeal for many commuters who use ride-hailing services. Dhruvam Thaker was one among those commuters. He says, “During my corporate tenure, I used to travel a lot for business purpose, in cabs. Often I found the service quality levels were not up to the mark.” However, Dhruvam was not among those majority of riders who would try changing the cab service provider with an expectation of a better ride next time. “It is said that you always want to improve things which you had a bad experience. That is true in my case as well,” recounts Dhruvam.

From the thought of ‘a cab offering hospitalities like airways and features like a well-starred hotel’ was borne The SMART Taxi. Started with a single cab purchased with the money gathered from friends and family, The SMART Taxi now runs in 17 cities across the country. Dhruvam is planning to expand its presence in 40 cities by 31 December 2020. “Never start something to gain fame, success or valuation. Always start something to solve real-life problems and make individuals’ life easy. I was not afraid of trying something new and getting fail. I knew, it will give me learning which no one could give, and if I could succeed, then I will have something which no one will have,” states Dhruvam.

A Roller-coaster Ride to Success

Dhruvam was a dedicated and target-oriented employee in an organization, with a strong belief in ethics, process and a passion for doing things differently than others, in whatever he does. After nine years of working, on a Friday, precisely on 10 June 2016, Dhruvam left his job to work for himself. Then, comes the first resistance every entrepreneur in India has to face – the society. Dhruvam recalls, “My inner circle – family, friends and relatives – resisted first. They were not happy with this decision and tried to convince me to go back to the job. But I had made my mind to go ahead.”

Two days after leaving the job, from 13 June 2016 onwards, Dhruvam was on the streets of Ahmedabad, researching about the market with a survey that drafted by himself. He did not have enough fund to hire an external agency to do a market survey before starting a venture. “I completed 163 surveys and got a result of 4.6 out of 5, which had boosted my confidence. It indicated that there is a need for such a concept, where people will love to ride in a cab which offers a professional, reliable and unique experience.”

Now, Dhruvam had the idea, and he knew that people would love to use what he is going to give them. But he did not have that one thing he wanted the most – money. “I approached eight banks, but none of them was ready to give me a loan. Finally, I gathered money from my friends and family members and purchased a cab,” shares Dhruvam, who would drive that cab for some time, as he could not afford to pay a driver. The SMART Taxi was officially started on 5 September 2016 with the founder himself giving the customers the real cab experience they were looking for.

Getting the first customer is the toughest part of any start-up. “It took almost three months for me to get my first customer. He paid Rs. 600, and it was our first invoice values,” recalls Dhruvam. The first customer gave that little push The SMART Taxi needed to get going. Dhruvam adds, “He was impressed with the concept so much. He referred our services to many of his friends, family and apartment residents and things started rolling well for us.”

The word of mouth marketing worked quicker than expected. Dhruvam, who was handling everything from answering customer query and driving them to their destinations day and night to making invoices and promoting about the brand, considered a small expansion. “I approached a few guys whom I knew and were driving cabs earlier. I selected them one by one, and I trained them. That is how our cab number started increasing,” says Dhruvam.

In no time, The SMART Taxi had seven cabs running all over Ahmedabad. “When we thought that we had enough cabs, we decided to start approaching corporate companies for business. We got our first corporate order in Feb 2017. From there on, by considering our consistent service quality and performance, we got referred to a few more organizations, and businesses started increasing,” shares Dhruvam.

It was with the customers’ feedback that Druvam decided to widen the operations of The SMART Taxi outside Ahmadabad. He explains, “Many of our customers wanted us to introduce our services in multiple cities. It would become easy for them to manage things from a single source, and the same was our plan too. We started connecting with local fleet operators present in different cities, shortlisted them, trained them and started operating services in other cities. Different Cities, One Experience – this became our motto.”

The SMART Taxi’s gross revenue has been growing by an average of 73 per cent, consistently from the past two years. Dhruvam adds, “With 97.3 per cent of total rides having zero complaints reported, we have had 61.7 per cent of repeat booking ratio. Over 84.2 per cent of our rides come through word of mouth itself.”

Since its inception, the work-culture at The SMART Taxi has always been customer-centric and filled with the highest ethics. Be it a deal with customer or fleet partners, it reflects everywhere. “We always give freehand to our fleet partners and team to bring innovative ideas, which we can incorporate to make our service even more special. We work on that idea, execute trials and roll out. That is the culture what we follow now and will follow in future too,” pinpoints Dhruvam.

Living in a country where parents would encourage their children to pursue a monotonous 9 to 5 job with a fixed income, entrepreneurship has not gained the importance it deserves. Our neighbours and society add further hurdles into it, by quoting examples of some well paid corporate jobs, which increase fear of failure in the minds of wannabe entrepreneurs. Dhruvam says, “There should be a better acceptance from family and society. When someone decides to do something on his/ her own, we must extend all the possible help.”

The excitement of starting from scratch is one of the first buzzes of being an entrepreneur. Being a successful entrepreneur himself, Dhruvam knows that success doesn’t come overnight. “You have to keep on trying and must have patience. There is no alternative to hard work,” says Dhruvam. Entrepreneurship is most certainly not for everyone. At the same time, there are many ways to become an entrepreneur, and one could be the right path for you. But always keep in mind this one thing – as Druvam puts it, “Whatever you do, always do it for your customers.”