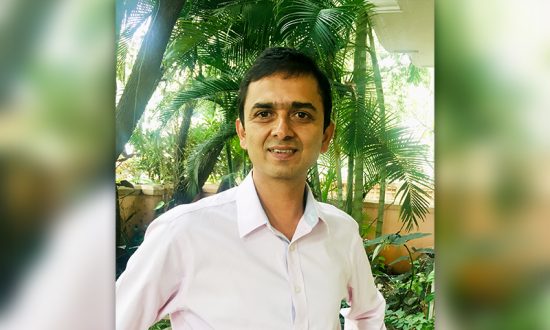 For the 120-year-old grocery store, KV Pai and Sons in Udupi, Karnataka, the pandemic changed everything. According to its owner, Ajesh Pai, who inherited the business from his father says for the first time, with the pandemic’s onset, he had to rethink his business strategy and realised it was time to move digital. For millions of homes, local Kirana stores like Pai & Sons’ ability to adapt saved the day. Ajesh Pai maintained a near-steady supply of daily items and ensured that people are not devoid of essential commodities during an outbreak of a terrible virus.

“The stories of Ajesh and Pai & Sons’ stores display the resilience of small grocery stores. We helped Pai &Sons’ to go digital,” says Anup Pai, who founded eSamudaay, which is possibly the first company to offer a local eCommerce stack as a service to enable independent, autonomous companies to operate local digital commerce marketplaces. Ajesh had a choice to look at several players who were digitising small businesses. However, he joined eSamudaay because he was particular about choosing a digital platform that is purely community focused and one that serves the local customers. “eSamudaay aims at providing an alternate model for digital adoption in India. The idea is to decentralise eCommerce and build a network of local entrepreneurs called ‘Business Mentors’ who will run small, independent and sustainable digital ecosystems at the local and even hyper-local level,” explains Anup.

Today like K V Pai & Sons, eSamudaay has been helping 100+ sellers go digital in the Temple town of Udupi during the pandemic. It has launched grocery services, restaurant food deliveries, farm products, and pharmacy service on its Udupi exclusive app. In the next 12 months, eSamudaay, like in Udupi, looks to set up over 2000 independent local commerce platforms across India, including Chandigarh, Nashik, Myore, Shillong Warangal, Patiala, Indore, and Varanasi.

While large conglomerates dominate the current e-commerce narrative, models like eSamudaay can be pivotal in enabling decentralised, self-governed digital marketplaces benefitting every stakeholder in the ecosystem. Anup opines, “digital empowerment has not yet percolated down to small producers and merchants in the nooks and corners of India. Consumers and producers within communities also don’t have enough visibility with each other.” eSamudaay provides a huge opportunity for commerce within and between communities, empower small producers and promote local innovations.

eSamudaay was founded during the COVID lockdowns. Anup recounts, “We saw that there is a massive need for digital adoption in non-Metro areas as well as a huge demand for entrepreneurial opportunities with a limited capital requirement, especially from the youth. Decentralised local digital platforms were seen as an approach to solve for both while also reducing the economy’s dependence on big tech platforms.” eSamudaay’s flagship product is a multi-tenancy SaaS product which provides a “Business in a box” toolkit for aspiring digital entrepreneurs to set up and scaleup local commerce (LCommerce) businesses. It brings together all the sellers of the town on a locally run digital platform which practices responsible data stewardship.

eSamudaay practices decentralised organising and a non-hierarchical, network-based structure. The founding team during the early discussion stage included Anup (20+ years in Banking technology), Ravinder Singh (10+ years in platform engineering) and Ravi Haldipur (20+ years in Business Development). Since the initial days, eSamudaay team has been joined by Medarisha Lyngdoh (15+ years in software project management), Venkatesh Nadhan (20+ years in Advertising and marketing), Sharmila Krishnaswamy (20+ years in operations) and Sudarshan Simhan (20+ years in HR). The team also includes our core partners such as Studio Carbon (Design), BlitzSquad (GTM/Rollout), and Strategence (Digital Marketing). “Every participant, including our partners, are shareholders in eSamudaay, and everyone has an entrepreneurial mindset. Support comes from the deep sense of purpose we all share and also the belief that decentralised networks will prevail in “Web 3″ – the third era of the Internet,” pinpoints Anup.

Being a Life-long Entrepreneur

Anup’s life as an entrepreneur began early under his uncle’s tutelage, who was the proprietor of a grocery store set up in 1896 in the temple town of Udupi. “Supplying the shop with biscuits baked by my mother and then working in the shop and getting exposure to all aspects of the running of the business during my school days,” recalls Anup. However, Anup helped many banks implement core banking and other systems before getting into some serious business. His first venture was Fintellix Solutions that he founded in 2006.

“Fintellix was set up to help banks turn data into an asset leveraging techniques like data warehousing. Fintellix was also the first mover in India to use Data management techniques to automate data flow from the Banking system to the Regulator (RBI),” shares Anup. The company served global banks such as BoA, Citibank, BNP Paribas, ICICI, and HDFC, and operated out of India and the U.S. In 2017, Nasdaq listed Verisk Analytics (VRSK), acquired Fintellix. From setting up a company in 2006 as a single founder to joining hands with a co-founder after three years and raising two rounds of Venture Capital from Tier 1 VC, Anup has had many milestones during his entrepreneurial journey. Anup adds, “Burning the VC money too quickly and then struggling toward profitability and independence from external capital, finding a buyer for the business and ensuring a good outcome for all parties are also some of the major milestones.”

In 2019, post the exit from Fintellix, Anup went on to invest and mentor over a dozen startups. He focused on investment themes such as decentralisation and democratisation of digital and backed firms that designed products and solutions focused on decentralisation. While still dabbling with startup investing, Anup has his second entrepreneurial venture, community commerce platform focused on digitising micro-entrepreneurs across India. Today, Anup’s immediate goal is to establish LCommerce (Local eCommerce) as a model for the faster, more efficient spread of digital across India. “In the long term, we want to establish eSamudaay as a Digital Bank platform for entrepreneurs,” concludes Anup.