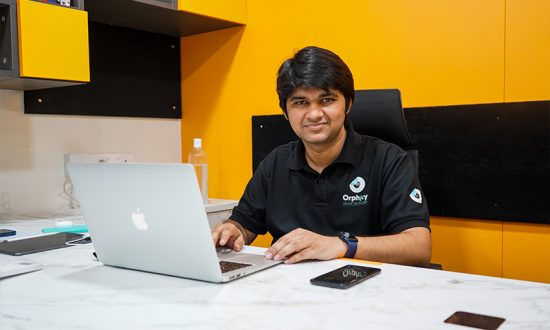 Vipul Tyagi, CEO, and Co-founder of EdTech Startup Orphicy. An electronics and telecom engineer, Vipul co-founded Orphicy along with 3 academicians in 2020. The startup offers live online coaching for the school curriculum (Classes 5-10) and also helps students prepare for NTSE/ Olympiads and other competitive exams. The learning modules are designed with a holistic approach focusing on extracurricular activities along with academics. Orphicy is Vipul’s second entrepreneurial venture. His first business venture already rakes in revenues to the tune of 100 million INR.

From the very onset of our childhood, we have been exposed to a set of creative activities whether they are undertaken by us or we are just subject to it. Most of the creative activities can be found intersecting across people from a common geographical location per se: If a child is hesitant in eating his meal the parent makes an airplane like motion and in the fascination of the act he gulps it down. This gives an exclusive fun element to an otherwise bland act of just eating food in the psychology of a child’s mind. Such is also a scenario when we talk about games. Game is a structured form of play usually undertaken for fun. But its definition has taken multiple forms, credits to various researches that have shown that Gaming boosts children’s social, health and learning skills. To elucidate the abovementioned thought, let us have a look at the evolution of gamification with the help of one particular research published by Smithsonian Science education centre. 1896, the year when Mendeleev discovered the periodic table is said to be the year when gamification was born. Mendeleev was known to have been an avid card player, so it was logical for him to use cards as a way to categorize the elements in a way he could understand. Mendeleev turned the classification process into a card game by listing each element and other information on a card and placing them face up on a table. By doing this, he was able to have a better grasp on the relationship of each element. Mendeleev published his findings, which led scientists to discover new elements to fill in the gaps of Mendeleev’s work as well as further developing the table.

Growing up, Mendeleev was not the most successful student, but he became a historical scientific figure because of gamification. This proves as an exemplary example of the benefits of gamification and the impact it can have on all students despite their prior academic achievement.

So a time came when Gamification got a place in the pedagogy of learning in order to give it a fun element. And let me tell you, the idea took a very successful flight once the targeted audience got used to it. On psychological front, making something as boring as studying (in the minds of students) fun, and an experience like never before certainly had its advantage which immediately attracted students as well as their parents. On the other hand if we look at it statistically we can see for ourselves that there are numerous researches available. One such research that was published observes the following points:

Using gamification to aid in cognitive development will allow an increase in the activity of the regions of the brain to allow for adequate development. An example of such game can be referred to as “Brain Games”. Brain games have become increasingly popular and are based on various questions and problems that the user has to answer or solve. Brain games can improve the rate in which the brain processes and maintains information.

Exercising with an interactive game is just as effective as normal exercise. This form of exercise will be very beneficial in adolescents that enjoy playing video games but are not currently physically active. There are many long-term benefits to being active.

Scientists performed a study to measure the level of engagement students displayed when utilizing gamification in the classroom. The researchers assigned a point system to various daily class activities. Then the students were measured based on their level of engagement. The researchers found that the game-like atmosphere was favorable in the classroom and increased productivity.

Gamification can be used as a teaching tool to educate adolescents of all needs. Scientists studied the effectiveness of using gamification in the form of a video game to teach students diagnosed with autism. The results of this study showed that this training package was effective in teaching age-appropriate content through gamification.

Gamification is not limited to the classroom but can be used in learning outside the classroom. Perhaps you break up your child’s math homework into sections. The child will then level up after completing each section to get hints that will solve a riddle. Or maybe you can have your child create their very own Periodic Table with a few elements just like Mendeleev did with cards. Gamification at home is also a good way to get involved in your child’s education!

Apart from this, the direct feedback of the students learning through this specific process of gamification was that they ended up scoring more than the ones that don’t (speaking from personal experience as well). I won’t be exaggerating when I say that Gamification has revolutionized the online learning process in more ways than known to us, but this ignorance is not harmful as far as students are topping their subjects.

Technologies for Cardiovascular Disease: A 2023 Appraisal
Seeing Strategically
10 Recommendations On How To Negotiate Outsourcing IT Contracts
Shopping in the Age of ChatGPT: How the New AI Rage is Revolutionizing Retail Experiences and Consumer Goods Manufacturing
Globus Infocom Limited: Opening Doors to Hybrid Learning
Upward Demand in Temporary CXOs During the Pandemic
CONTACT US