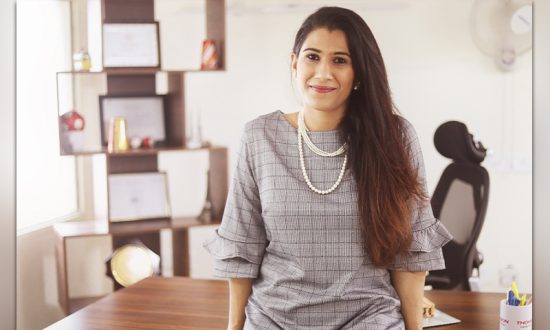 Pallavi is a fun-loving and fiercely independent womenpreneur. She started her journey in the e-commerce sector back in the year 2013, when her idea to go online with SPPL’s first global licensed brand Kodak TV was looked upon with critique and skepticism. Mother to a young toddler, Pallavi has been bringing her baby to work since he was 45 days old. She prepared a nursery for him in office before joining back so she never felt she was not giving time to her child and at the same time , she did not want work to suffer, since SPPL was still in the expansion stage. She loves travelling with her baby and has been extensively travelling since 3 months of age.  At the age of 9 months, her baby has been to Roller Coaster parks and beaches, where if one parent wants to do an activity, the other stays back. Pallavi enjoys adventure sports like bungee jumping, skydiving, snorkelling along with other water sports. On the flip side, she likes quiet time as well and loves to finish books at one go when time allows.

Reaffirming commitments and goals that have been set -out by team BJP under PM Modi’s aegis; Union Budget 2022  comes as a resonance to India’s future- forward growth story.

Combining projects, programs and initiatives that are focussed to drive the country towards an inclusive economy, FM’s announcements on infrastructural development, brought a lot of alignment and economic prudence. Enabling cost optimization by creating synergies across sectors, from agriculture, infrastructure, logistics, supply chain , transport till the end consumer, budget 2022 further brings reinforcements, that will go a long way in realizing India’s dream to become the global manufacturing hub and a $5 trillion economy.

Already on a record acceleration mode with ‘Make in India’ or ‘Atmanirbhar Bharat drive, the country is on its path to become the epicentre for hi-tech manufacturing with global brands and technology giants like GE, Siemens, HTC, Toshiba, Boeing grounding their feet here.  They have either set up or are in process of setting up manufacturing plants in India. Attracted by the country’s promising and fast growing  market of more than a billion consumers and their increasing purchasing power.

According to Department for Promotion of Industry and Internal Trade (DPIIT), cumulative FDI inflows in the manufacturing subsectors amounted to US $ 100.35 billion between April 2000 and June 2021.The Government of India has been constantly gyrating several initiatives to promote a healthy environment for the growth of manufacturing sector in the country. Some of the notable initiatives and developments are : Approval of  PLI scheme for 16 plants for key starting materials (KSMs)/drug intermediates and active pharmaceutical ingredients (APIs). The establishment of these 16 plants is projected to result in a total investment of Rs. 348.70 crore (US$ 47.01 million) and generation of ~3,042 jobs. The commercial development of these plants is expected to begin by April 2023.

For India to chase up and realize its dream of a $5 trillion economy, growth of MSMEs is of utmost importance, as 30% of country’s GDP rests on MSMEs.  Towards this, PM’s Gati Shakti program and Transportation and Multi sector development under –One Station and One Product Scheme, during Union Budget 2022 has brought a new wave of optimism for supply chain, logistics and e-retail sectors.

This is sure to further the interest of foreign nationals and investors in ease of doing business (EODB) in India. For a very long time, FDI have been held back on account of India’s weak infrastructural development and facilities, which made it difficult for stakeholders to stay bullish and confident about the country. With the government’s magnified focus on infrastructural and overall transport sector a new confidence is infused in positioning India, as a global destination for new businesses and investment opportunities.

With over 35% y-o-y increase in capex and a proposed infrastructure spend of over Rs 10 lakh crore, the Union Budget is a step in the direction to reinforce the commitment to the use of  infrastructure as a force multiplier for sustained economic growth. Currently 64% of the country’s transport and connectivity is via roads .


As part of rail connectivity, 100 PM Gati Shakti Cargo terminals, that are proposed to be developed over the next 3 years. The amplified support to the National Highways network  that is  proposed to be expanded by 25,000 km during the year, ( nearly double of the maximum achieved in any of the last 5 years).  All,  such projections and plans, are a  unanimous call-out that this  is a ‘growth and infrastructure-focused Budget’ and the Union government has made its intention clear by pushing up capital expenditure. Highlighting the need for coordination between various Ministries/agencies to enable identification and timely completion of priority projects, the Gati Shakti initiatives is certainly one of the cornerstones of Budget 2022-23.

This program will leverage the multimodal transport infrastructure, that will greatly help in reducing logistics costs and connecting the country even further for last-mile outreach . This will collectively give marketeers and e-commerce players a  competitive advantage, as with the reducing transport , freight and octroi costs the overall pricing will stabilize and the cost-benefit will be passed directly to the end-consumer. Adding a further reason to cheer and root for , will be able expansion of market and consumer base, which will become possible with  the PM Gati Shakti program.

The government had also announced that they would replace the Special Economic Zones (SEZ) with a new legislation that would make the Act compatible with the world trade norms and those of World Trade Organization. Although long pending, this approval had been sought by the Ministry of commerce a while ago and has only been granted. We visualise this as a beneficial scheme and if the legislation introduced is opportunistic, it will enable ease of export as well as domestic business. The government has also emphasized a large bit on the MSME sector by extending Emergency Credit Line Guarantee Scheme (ECLGS) up to March 2023, and introducing the Raising and Accelerating MSME Performance (RAMP) programme worth Rs 6,000 crore to be rolled out over five years. Many portals have been interlinked, and will now perform with live, organic databases providing G2C, B2C, and B2B services. This will enable credit facilitation, skilling, and recruitment for the MSMEs with an aim to formalise the economy and promote entrepreneurship. With an intent to develop electric vehicles (EV) as the ‘sunrise sector’, promote electrification, and encouraging private sector to create sustainable and innovative business models the government has given a clear flag off  to adoption of green energy. Laying many ambitious goals and targets budget 2022 is a vindication of  the government’s commitment to create green infrastructures and move towards a green economy.

Lastly, with its growing attention on women-workforce participation, by way of introducing women-led development schemes such as Mission Shakti, the government is pushing paddles in full force to better equip, women for greater participation in the workforce. With a focus on requirements for a manufacturing-led $5 trillion economy, these initiatives will help ensure a continuous development and re-skilling of workforce to acquire future-ready skillsets.

While Budget 2022-23 reinforces the Union government’s commitment to the country’s inclusive  development, it will be interesting to see how the timely implementation of  these programs will work towards a robust growth of India, taking it from a developing to a developed one.

The Benefits of Artificial Intelligence for your Business
What’s Your Value in 2023?
Transforming the Executive Search Industry & Making an Impact
Bring the Zing – 5 Keys to Powerful Presentations, Briefings, and Meetings
Health Tech @ Budget 2022 – The Government has Put Its Money where Its Mouth is
The Road Ahead for Pharma Communication
CONTACT US