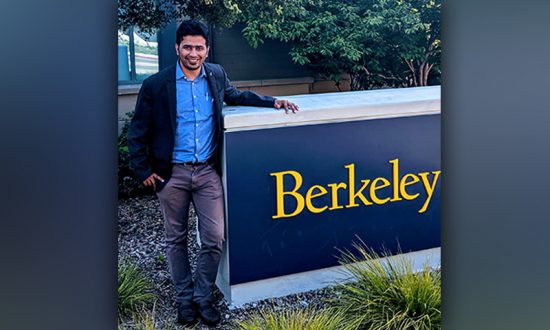 Founded by Ganesh Shankar, FluxGen Engineering Technologies is an IoT start-up company based in Bangalore that is keen on developing engineering technologies for Water & Energy systems.

Ask Ganesh Shankar, Founder and CEO of FluxGen Technologies – an IoT start-up based in Bangalore that is keen on developing engineering technologies for water and energy systems – about his most significant achievement before he turned 18. Ganesh would tell you a beautiful story that happened in his first year of Pre-University College at The National College Basavanagudi, Bangalore. Ganesh was attending a mathematics class handled by the principal of the college, Prof. Balchandra Rao – one of the most exceptional teachers at that time in the college and in Bangalore. Prof. Rao was teaching analytical geometry for about a hundred students. However, Ganesh was finding it difficult to follow the class and turned to his classmate sitting next to him for a little help. Immediately, the duo went into a conversation-mode while Prof. Rao’s class was still on.

Long story short, Prof. Rao caught Ganesh’s friend and asked him to stand up and stay like that for the rest of the period as a punishment for disturbing the class. Ganesh felt guilty and wanted to apologise to his classmate after the class for being the very cause of him being punished. However, in an impulse, Ganesh stood up and told Prof. Rao that he was the one who requested to explain the concept and deserve to be punished instead to his friend. Prof. Rao’s reaction was a little unusual at that time, he asked both Ganesh and his friend to sit down and continued with his class without further ado. “The courage to owning up my mistake during that mathematics class and ensuring the classmate of mine was not punished, was what I consider as the biggest achievement as a teenager. Though I must say it is not really a matter of pride, however, I am glad the event has left a long-lasting impression in my mind to share on what may have made me a leader,” recalls Ganesh. 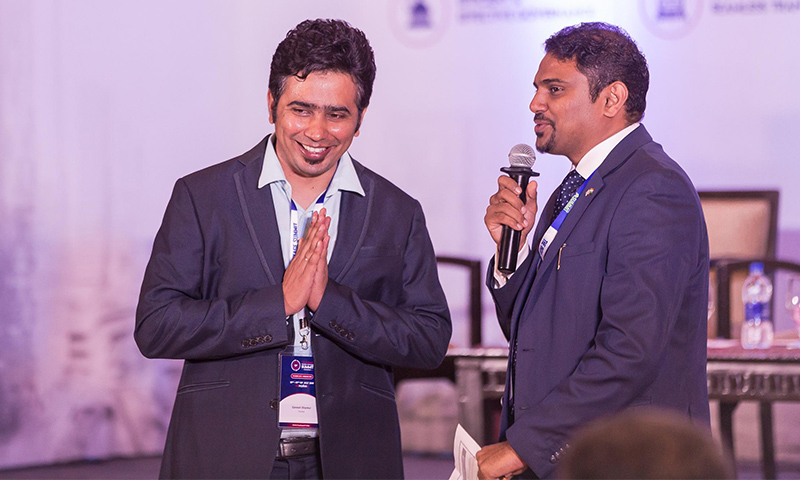 Coming from a family of teachers, Ganesh aspired to become one himself. With his father, uncles, and most of his relatives being teachers, he had no business background. While pursuing a degree in Telecommunication Engineering from RV College of Engineering, Ganesh started a small coaching centre where he taught electronic circuits to 100 students. “After graduating, I joined NextFirst Engineering Technologies because I wanted to gain experience working in a start-up and learn how to build devices and systems. In 2006, I got into IISc for research in the ion-trap mass spectrometer and went on to work with General Electric Company (GE), a well-known American multinational conglomerate”, reminisces Ganesh.

Realising that he was not wholly using his education, Ganesh resigned from GE after two years, with a vision to make eco-friendly solutions for the common man. Having no experience in sustainable energy, Ganesh joined SELCO India, a solar energy company. “During the six months I worked there, I travelled to places like Ujire in Dakshina Kannada district in Karnataka. This experience gave me a glimpse of on-ground problems which I was not fully aware of”, says Ganesh. 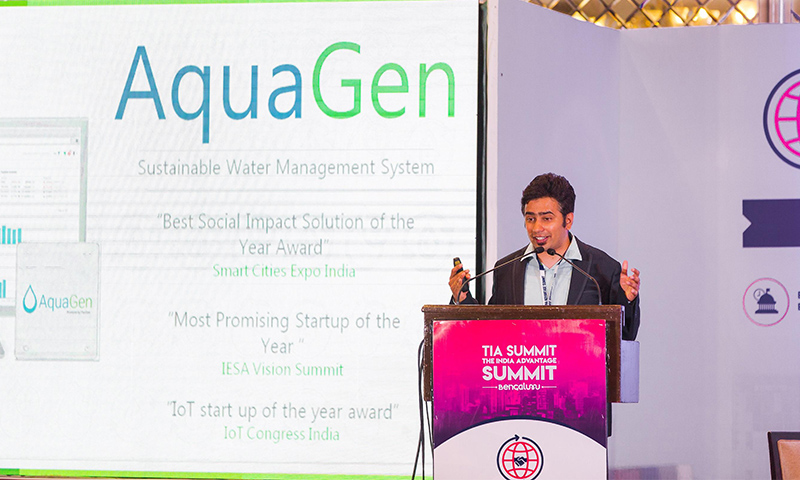 After his stint at SELCO, Ganesh came back to Bangalore and started FluxGen as a Projects and Consulting Company in Sustainable Technologies at the end of 2011. In 2016, Tanishq, a Titan Jewellery Division, asked them to develop a solution where they could monitor their water consumption patterns every 5 minutes, which led to the product AquaGen (Water Management System). He adds, “It took us about six months to develop this, after which we were able to provide solutions.”

Taking a Big-Step towards Sustainable Living

Water utilization is generally not given prime focus and importance, neither is its conservation. Even though India has many big rivers flowing through – some of them being perennial rivers – the country still suffers from water shortage for cultivation, drinking, and manufacturing. “The reason being that much of the fresh river water goes to the sea unused. Judicious usage with efficient planning of the available freshwater resources can be the most suitable solution to avoid ‘Day Zero’ water crisis,” opines Ganesh. The importance of water can also be highlighted from the fact that about 60% of the human body and nearly about 70% of the human brain is made up of water. Also, about 25-kilo litres of water are needed to make a living of 4 people. Ganesh adds, “Talking about the infrastructure segment, around 300 tonnes of water is required to make 1 tonne of steel. Thus, water is a necessary ingredient for both home and industry consumption.” 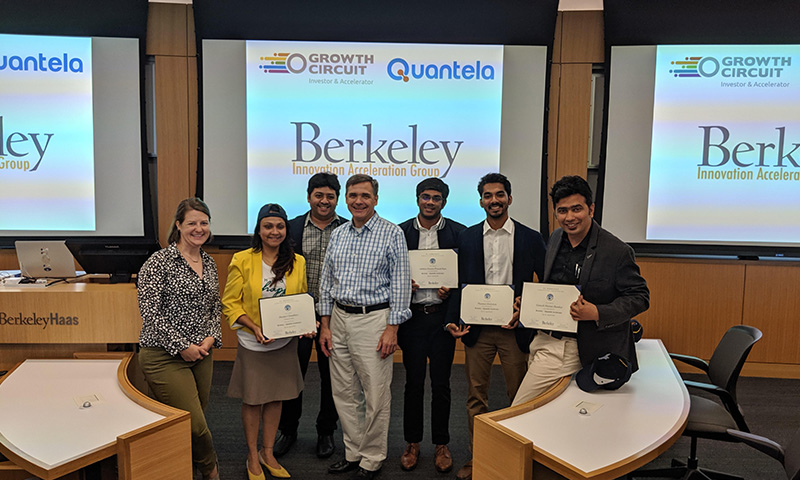 Considering human health, nearly 39% of the world population is affected by water scarcity and chronic disease. About  1800 children under the age of 5 are killed every day due to the use of unsafe water. The prime cause being that Indian industries nearly use  50% of the water required for human use. “Proper usage of water at the industry means that more water is available to people for their household consumption. The ironic fact is that when we have advanced technology for gaming and entertainment, there is no profound use of technology in water management and its conservation,” shares Ganesh.

A great way to manage water efficiently with digital technology effectively put to use is with the application of AquaGen’s Architecture which is based on the Industrial Internet of Things Technology (IIoT) & Artificial Intelligence. It is designed in a way to gather meaningful and actionable data about the water flow and distribution of water. Built with Best-In-Class Hardware and Software, AquaGen is compatible with any digital water flow meter and water level sensor and has a 6-sigma approach that is used to understand a problem and present a suitable solution for it. Helping out the domestic as well as an industrial segment to meet their water needs, FluxGen has recognized how to optimize their product to the water usage so that it can be used for regular domestic household purposes as well, distinguishing them from their competitors. 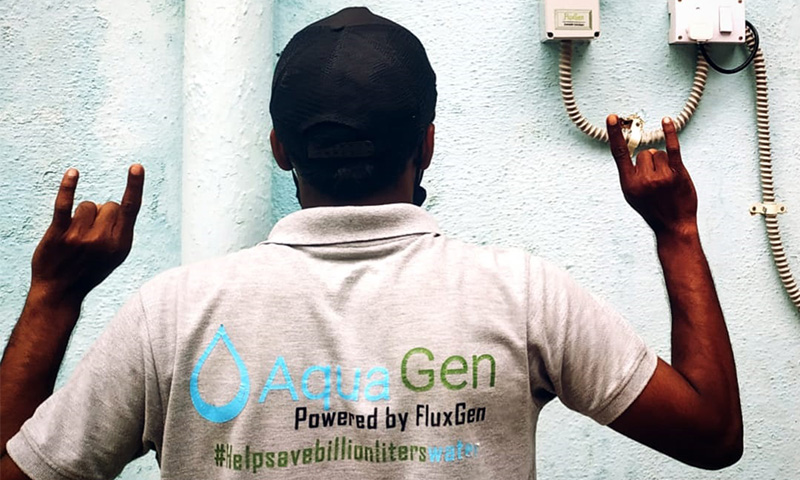 With a trend of Digital Disruption in managing resources more efficiently in the urban sector, Technologies like IoT, ML, AI, IIoT, Big Data Computing are being sought after. Being a tech company, FluxGen started to work on this area to develop a low-cost AI IoT solution for better living. Pioneering in IoT deployment for renewable energy, they have understood that industries are plagued with many maintenance issues, and that water has to be measured everywhere. “The first step for this is to monitor water usage in the region. FluxGen’s cloud connector – AquaGen is a very adaptive solution to existing infrastructures to monitor water flow, level, pressure, and energy consumed in water infrastructure. This system strategizes the water usage pattern and subsequently takes corrective action immediately by alerting the ground maintenance staff using mobile application”, quips Ganesh. With this device, 150 million litres of water have been successfully monitored with 100+ devices, saving about 15 million litres of water, which can be used by 200 villages for a year.

FluxGen’s water management solution, AquaGen has been appreciated by repeat orders at deployment sites from reputed customers including Titan Jewellery, Britannia etc. Adding to the accolade, FluxGen has been awarded the ‘Best Social Impact Solution Award’ at Smart City Expo India 2018 held at Jaipur. Along with this, they have also received the IoT Startup of The Year Award (2016) and Engineering Impact Award at Austin, Texas, and received an overwhelming response at the Futuristic Technologies Expo at Science City during the recent Vibrant Gujarat Summit held in January 2019. Having partnered with successful platforms like CISCO LaunchPad, Deshpande Startups and NASSCOM CoE-IoT, FluxGen has been able to generate good leads. 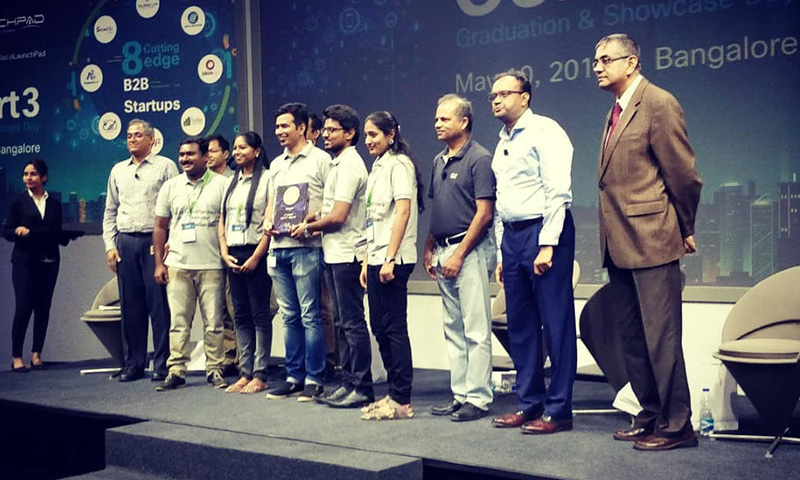 In 2018, Ganesh started another dream project which was a consortium of leaders working in the business of sustainability, calling it ‘The Sustainability Mafia’ with the tagline ‘The lobbyist for your grandchildren’. “I invited most of the people I had met from the start of my journey in sustainability back in 2010 to the group. It started as a WhatsApp group focused on sharing solutions in sustainability, to later organising regular meetups of members to help each other grow through the common interest in the business. As of today, we are about 100 members (Read Mafiosos) who have dedicated most of our time to solve sustainability-related problems in energy, water, waste, clothing, construction, etc., from different parts of India and the world”, says Ganesh. 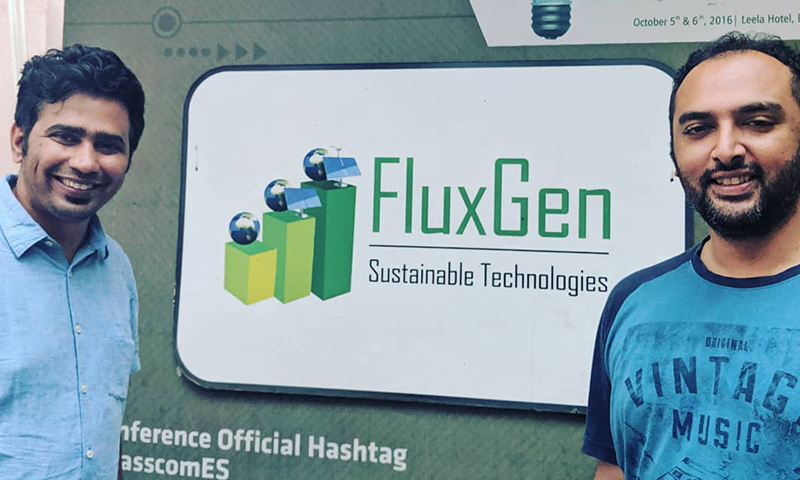 A non-profit organisation to multiply the impact of sustainability leaders through goal-oriented collaboration, the Sustainability Mafia would not have been possible without Arjun Gupta of Smart Joules, who saw the value of having a community of leaders in Sustainability much more than one can imagine.

An engineering graduate, Ganesh would spend his days indulged in philosophy. “Plato, Buddha, Lao Tzu, Rumi, J Krishnamurthy, Friedrich Nietzsche, Khalil Gibran, etc have been a great influence and the stories of Mahabharata. The discussion I had with my friends on these philosophers and their ideas has become a vital part of my decision-making process in the entrepreneurial journey so far, especially during the tough times”, adds Ganesh. 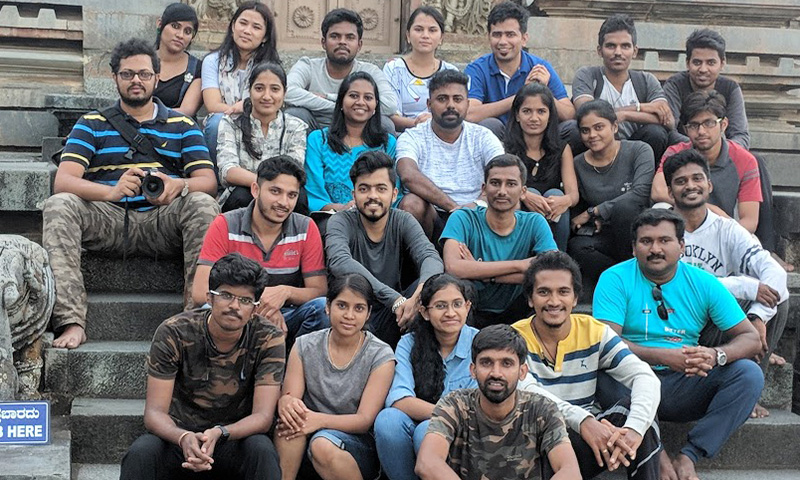 Having embarked on a journey of 10 years with a vision to make sustainable technologies as the default choice for the world, Ganesh and his team at FluxGen had worked on Renewable Energy Systems, Rural Electrification using Solar Photovoltaics. Recognizing the “Need of the Hour” from 2016 FluxGen has been focusing on “Making Industries Water +ve”. Using IoT along with Data Analytics, FluxGen solves customer problems through monitoring and analyzing the systems they built. “I’m a strong believer that you need 2 Gs to succeed in a career. One is Goal, and the other is Guru. We had to an extent figured out our goal, still, we were really in need of the other G. With this thought in mind, last October we applied for multiple start-up accelerators as we required mentoring to have accelerated growth in our business and product development. Fortunately, we got selected to some the most sought-after accelerators in India and world, considering the potential impact of our work”, says Ganesh. 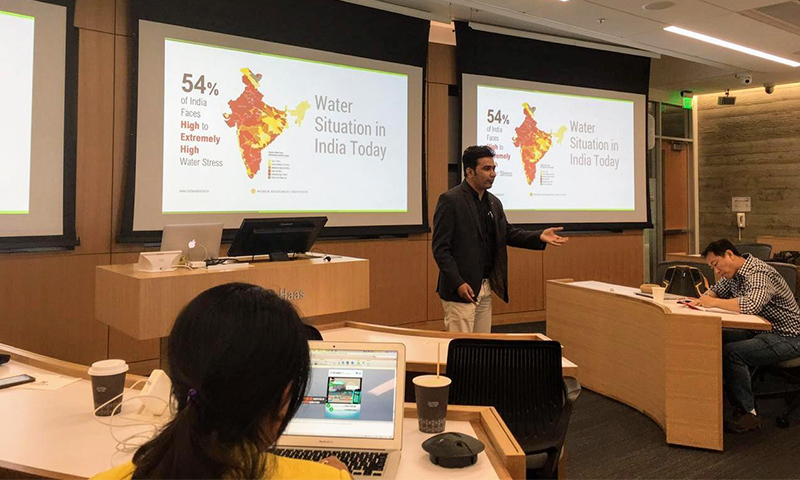 Currently measuring and managing about a hundred million litres of water for various facilities, which include food processing, textile, and manufacturing industries, FluxGen plans to expand their base to Paper and Pulp, Chemical, Pharmaceutical and other industries which consume more than hundred-kilo litres of water per day, in the next three years. Intending to introduce water quality monitoring along with their offering so that people are conscious of the water they are consuming and discharging to the environment. Ganesh concludes, “Hopefully in five years, we would be able to offer end to end water management services for industries and smart cities projects. If things go according to the plan, we will be able to manage cumulatively ten billion litres of water per day and potentially “Save a Billion Litres of Water Every Day Using Our IoT and AI-based Water Management Platform” which provides prescriptive alerts to avoid water wastage in water networks.

Bridging the Gender Gap
FidyPay - Revolutionizing the Future of FinTech Innovations
How a Teen Built the Platform to Bring Together Young Artists
Offering Easy-to-Use Digital Adoption Platform Solutions for All - Whatfix
The Change-Maker of K12 Education
Providing Custom-Made Employee Perks Under One Roof!
CONTACT US