Second Wave of Cases to Keep Euro Under Check

Since the start of 2020 till date, the EURUSD pair has gained by 6.19 per cent while EURINR has depreciated by around 8.93 per cent. Meanwhile, the dollar index has declined by 3.58 per cent in the same time frame. However, Euro has lost some value in recent times on account of the second wave of coronavirus cases in major euro bloc countries which is likely to affect their economic recovery.

Spain and France become the new hotspot in the EU

The second wave of coronavirus has struck major parts of Europe with Spain and France being the most seriously affected ones. France recently posted nearly 10000 average daily cases and Spain has crossed 600000 cases in totality. In the last two weeks itself, Spain health officials have diagnosed 120000 infections also the percentage of tests coming positive have continued to rise. 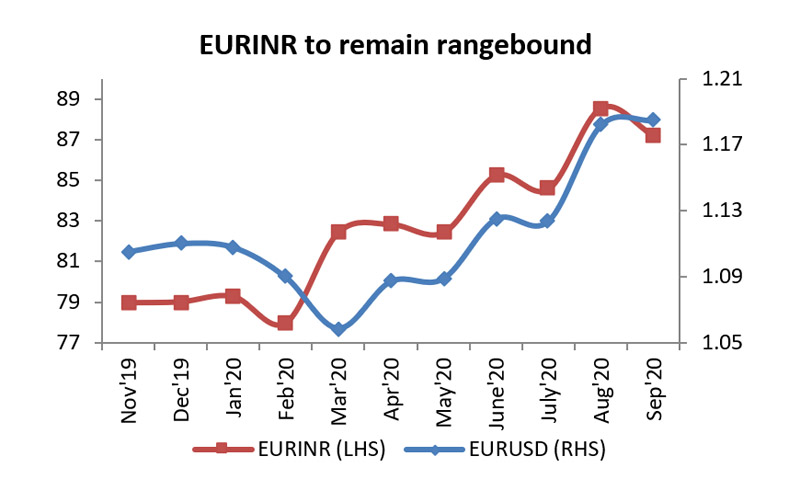 The economic stimulus to continue at large scale

In the latest ECB monetary policy meeting, the committee decided to keep interest rates unchanged and stimulus package also to provide support to the pandemic hit nations within the bloc.

In the earlier meeting, ECB expanded the Pandemic Emergency Purchase Program by 600 billion euros bringing the size of the stimulus program to 1.35 trillion euros to be deployed until June 2021 or till the bank feels the crisis is over.

On the appreciation of the Euro in 2020, Christine Lagarde noted that the central bank would be keeping a key eye on wild swings in Euro. The central bank also revised its growth forecasts upwards for 2020 from -8.7 per cent in the June meeting to – 8 per cent in its previous meeting. For 2021, the ECB is now expecting a rebound of 5 per cent and 3.2 per cent for 2022.

GDP contractions for Eurozone in Q2 2020

The Eurozone economy shrank by 12.1 per cent in Q2 2020 on account of Covid-19 lockdowns across nations which shut businesses and hampered consumer spending.

Italy along with Spain which were the hardest hit nations from the pandemic contracted by 18.5 per cent. France, Portugal and other nations also endured steep declines for the quarter and no country was able to escape the impact of the pandemic. For the currency union as a whole, it saw its biggest decline since the start of 1995.

US daily number of coronavirus cases has dropped significantly from its peak but the daily cases continue to be at elevated levels. Along with a huge number of daily cases death tally has been consistent in the US.

However, WHO had earlier warned the European nations of a possible second wave of the virus in Europe which is turning out to be true for Spain, France and Italy. Leaders from the countries have averted the possibility of any more nationwide lockdowns.

US FED in its latest monetary policy meeting affirmed of near-zero interest rates till 2023 and so has been the policy with ECB as well. ECB is also ready to provide continued to support to the ailing economies as well but expects some fiscal stimulus to kick in as well.

Meanwhile, US 10 year Treasury yields have been on a falling spree since the start of the pandemic as investors still remain cautious over the recovery of global economies going forward. US 10 year yields have fallen from pre-pandemic levels of 1.684% in Feb’20 to 0.666% in Sep’20.