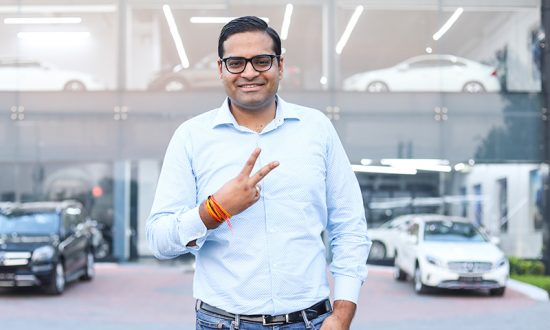 Sumit Garg is the MD and Co- Founder of Luxury Ride, a final shopping destination for the foremost exclusive and fascinating pre-owned luxury cars. Sumit was born to a business family, the path to entrepreneurships was always given. He has completed engineering from RVCE engineering college and right after his college he founded KoiBhiCar.com in 2012, an online marketplace for pre-owned luxury cars. After a quick realization about the industry, Sumit shifted his business to an offline model and established Luxury Ride in 2015 along with his two friends. At Luxury Ride, Sumit oversees various departments and his prime focus is exponential expansion of Luxury Ride across India. He is also highly involved in the day-to-day functioning of the company in order to get the DNA right which can support the exponential business growth and create a strong foundation.

According to a study by OLX-CRISIL Auto, the pre-owned car industry is estimated to grow at the rate of 12-14 percent CAGR in the next five years taking the market size to more than 7 million vehicles by FY26 from 3.8 million units clocked in 2021.

This steep surge in the demand for the pre-owned car is driven by a multitude of factors that can be attributed to a favorable mix of the pandemic, changing consumer behavior, digitization, the emergence of organized players, increase in disposable income, availability of financing options, which are few reasons among others fueling the rapid growth of the sector.

Though the pre-owned car market always existed in the automobile industry, the pandemic can be considered to be one of the major factors responsible for the brisk popularity and acceptance of the sector in the last couple of years. The disruption of public transport along with the necessity to maintain social distancing and keep the hygiene standards intact encouraged people to opt for personal mobility. But given to the price hike of new cars owing to the BS-VI norms along with the long waiting period due to semiconductor shortage shook the consumer faith in new cars. Moreover, the need to exercise frugality in light of the financial constraints and uncertain times encouraged people to consider the pre-owned cars which came up with the backup of multiple value propositions that too without compromising on the financial stability.

Further, the pandemic amplified the process of digital integration of the pre-owned car industry which otherwise was materializing at a very slow rate. It was a major step in organizing the previously fragmented sector. Many organized players ventured into the online space providing end-to-end services and products to fill the void created by the physical discontinuity of operations and also meet the requirements of the consumers. The new-age tech platforms focused on bringing the perfect amalgamation of valuable online and offline assets to enhance the customer experience. From taking the consumers through a 360-degree virtual tour to collating detailed car information and history to offering financial options that too backed up with physical outlets for the thorough inspection of the vehicle before purchase instilled trust and faith in the customers with respect to the authenticity of the product that acted in favor of the sector.

Moving ahead, over the years consumer behavior has changed a lot. The desire to always keep up with the trend and the fast-changing needs together have highly triggered the need for faster vehicle replacement. The ownership period has substantially contracted to 4 years from 6-8 years which is further expected to dip down to 3.5 years in the future. To suit the shorter ownership period, purchasing a pre-owned car emerges as the most viable option which can offer a well-maintained, almost new car with just a few repairs and fixing that too at a much lower price. It is a very lucrative and affordable deal for the customers showing value for money but at the same time are also driven by the desire to own high-end cars.

In line with the changing consumer behavior, major progress has happened in the luxury car segment where the rising millennial class as the potential customers have unanimously shown a huge inclination to own a luxurious car. Being more sensible to gauge the profitability coming from the purchase, they prefer going for a pre-owned luxury car coming with the same advanced technological advantages as that of a new car and at times with the added benefit of extended warranties.

Additionally, customers today are highly aware and make a conscious decision when it comes to purchasing a valuable asset. The fact that the value of a new car depreciates by 30 percent in the first year of purchase itself is a triggering factor for customers to consciously lock a profitable deal with the purchase of pre-owned cars coming with the same benefits and performance as that of a new car.

Cumulatively it can be said that all the factors mentioned above with the increasing urbanization and nuclearization will bring about the progressive transformative changes in the sector which are only expected to see a positive growth curve with the paradigm shift towards value for money.

Technologies for Cardiovascular Disease: A 2023 Appraisal
Seeing Strategically
10 Recommendations On How To Negotiate Outsourcing IT Contracts
Shopping in the Age of ChatGPT: How the New AI Rage is Revolutionizing Retail Experiences and Consumer Goods Manufacturing
How IoT and Data are shaping up the parking ecosystem in India
Reel Vs Real: OTT Viewers Struggle To Find Balance In The New Age Of Media Consumption
CONTACT US