Riskier assets have started to decline in value across the globe on the uncertainties related to global economic recovery. With a fresh set of lockdowns announced in major parts of Europe and delay in the announcement of the US fiscal stimulus package led to the depreciation of riskier assets in turn appreciation of safe-haven assets such as Yen. Since the start of September JPYINR has depreciated by 3.15 percent USDJPY has declined in value by 1.3 percent. Dollar index the other safe-haven asset has gained in value by 1.68 percent during the same time frame.

Japan experienced a second wave of coronavirus cases since the start of July and the country saw its peak of the second wave on 3rd August with daily cases rising to 1998. Since then cases have been on a declining spree and currently, the country is experiencing around 500 cases per day. However, the total number of cases in Japan has now crossed the 100000 mark. 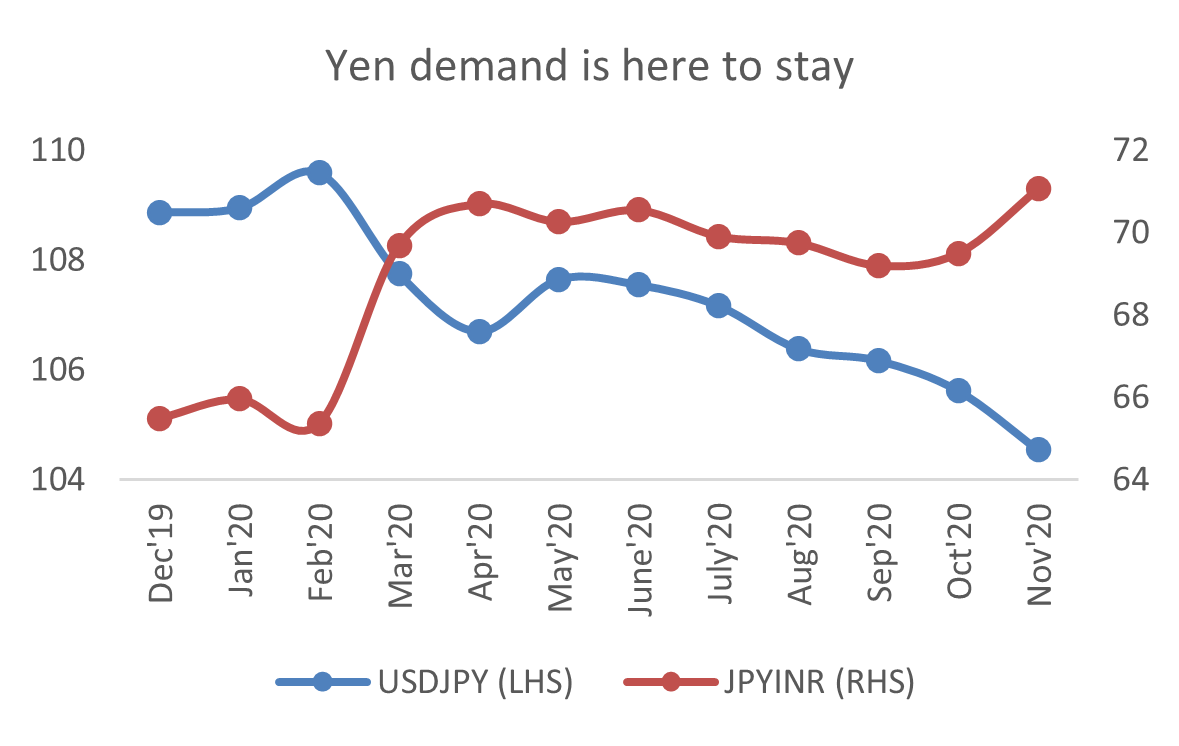 Meanwhile, Japan continues to remain heavily dependent on its exports for economic recovery. Japan’s exports declined by 4.9 percent in September narrowing from a 14.8 percent drop in August. The improved figure, supported by the biggest gain in exports to China in more than two and a half years offered an indication that the low point in trade has passed.

New Prime Minister Yoshihide Suga faces the challenge of trying to revive the economy after it shrank by a record in the second quarter. His success will greatly depend on exports the key driver in economic recovery for Japan.

However, the economy’s resilience on the global trade market makes it vulnerable especially with the virus resurgence in its key trading partners such as Europe and the US.

For the year 2021 BOJ is expecting Japan’s economy to contract by 5.5 percent against earlier estimates of 4.7 contractions in its July meeting. The contraction can be attributed towards delay in recovery in services demand.

The BOJ kept its negative interest rate of 0.1 percent on bank deposits and the unlimited purchase of Japanese Government bonds unchanged to ensure the 10 year yield remains around 0 percent.

Risk sentiment across the globe is possibly swaying back and forth on the back of virus vaccine news and its estimated release date. US election results and a possible delay in second stimulus package from the US government is also creating market volatility.

Recently EU saw a surge of coronavirus cases which lead to partial lockdowns across many countries in the region. Uncertainties on global demand recovery still possess a significant risk and hence safe haven demand of Yen continue to remain in focus.

Meanwhile, Japanese government upgraded its view on consumption in a monthly report in October on stronger demand for electronics and higher travel spending but cautioned that the broader economy continues to remain under pressure from the coronavirus pandemic.

The Japanese government has already announced a US$ 2.2 trillion rescue package but markets are expecting a further extension to the package as well.

Any kind of future development which leads to mass production of vaccine rollouts earlier than anticipated can dampen the demand for Japanese Yen.

The Future of Work: The 3 W’s that Matter
Nitric Oxide: The Future of Medicine
Scale Your Heart
Channelising fear in a constructive way: Tools to face difficult situations
How Smartphone Ownership Can Boost Financial Inclusion in India
Why Digital India is Vulnerable to New Age Cyber Attacks
CONTACT US