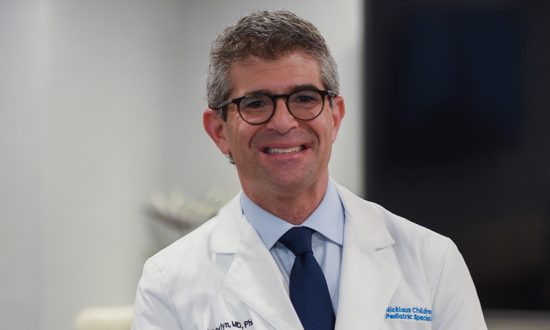 Very few people are fortunate to find their career calling at an early stage, so much so as a 4-year-old boy wanting to become a surgeon, save lives, and make a difference in the community.

Dr. Chad A. Perlyn, President of Nicklaus Children’s Pediatric Specialists, not only fulfilled his childhood dream of becoming a pediatric surgeon, but also has donned numerous hats through his career.  From operating on children with complex birth defects, mentoring and educating surgical trainees, leading surgical trips in developing nations, and now running a large multi-disciplinary medical group as its president, his journey represents how dreams can be achieved and how one can lead with passion, commitment, and purpose.

A Journey from Dreaming to Becoming a Successful Surgeon

As a 4-year-old boy, Dr. Perlyn saw his younger brother fight for his life and almost not survive. He still remembers going to the hospital and watching a pediatric surgeon coming in to comfort his parents, explaining that their son was likely going to die and that his only chance was to have an emergency exploratory operation. Fortunately, Dr. Perlyn’s brother made it through the surgery. What left a mark on a young Dr. Perlyn was how the surgeon not only saved his brother but also his family. “From that moment on, I knew I wanted to become a surgeon,” shares Dr. Perlyn. This dream persisted throughout his childhood.

While attending college at Northwestern University in Chicago, Dr. Perlyn read a newspaper article about a surgeon making ears for children born without them. Mesmerized by it, he wrote a letter to the surgeon, Dr. Bruce Bauer, and in turn, received an invite from him to watch him perform one of the surgeries. Dr. Perlyn visited and watched Dr. Bauer perform surgery in awe. From then on, he developed a deep and lasting personal commitment to becoming a pediatric plastic surgeon and worked hard toward fulfilling his aspiration to help children.  He hasn’t stopped since that day. 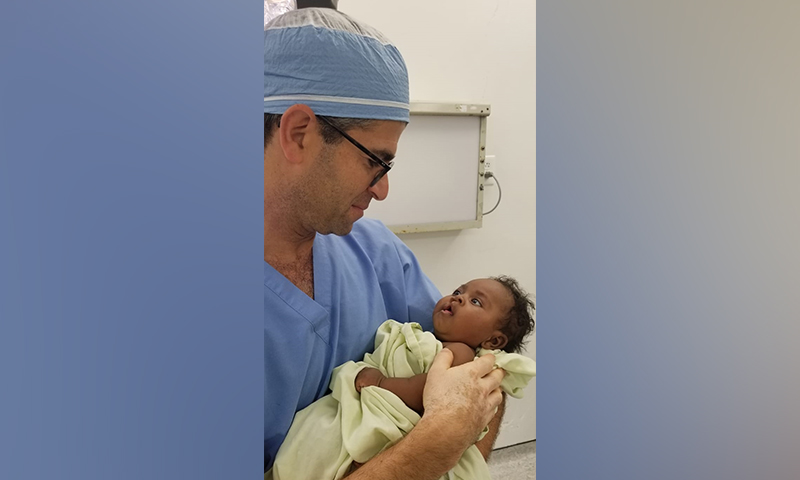 As Dr. Perlyn began looking for career opportunities in his hometown, he heard about a new medical school opening in Miami, Florida, which was to be a part of Florida International University. Intrigued by this he met Dr. Pat O’Leary, the Associate Dean of the Herbert Wertheim College of Medicine at Florida International University, and joined Miami Children’s Hospital (now known as Nicklaus Children’s Hospital) as Pediatric Plastic Surgeon in 2009. “Dr. O’Leary welcomed me home to Miami, and I was deeply moved – not just that I would be a part of launching a new medical school but that my clinical work was to be at Nicklaus Children’s Hospital – the very place where my brother’s life was saved.  I had truly come home,” reveals Dr. Perlyn. After settling into his role, he thought his focus would be on clinical surgery and basic science research; a leadership role was never on his mind. However, destiny had other, bigger plans for him.

On January 12, 2010, a massive 7.0 Mw earthquake devastated Haiti, affecting millions of people.  Within days, Dr. Perlyn found himself leading one of the very first groups of pediatric surgeons to Haiti help earthquake victims.  His leadership continued in this area for long after his team returned home, as he continued to coordinate the efforts of dozens of more medical staff members over many weeks. To this day he considers this experience as his proudest achievement to date.

Shortly after the earthquake experience, the Director of Surgical Services at Nicklaus Children’s Hospital announced that he would be relocating to New York and suggested Dr. Perlyn be named as his replacement. This was a massive responsibility for a newly minted surgeon who was not even a year into his practice. However, based on his surgical leadership, both the senior management team of the hospital and his peers, recognized his potential and gave him the opportunity. Now over a decade later, Dr. Perlyn has risen through the ranks to not just lead his surgical colleagues but is also the President of the entire employed medical group at Nicklaus Children’s Health System.

Nicklaus Children’s Health System: Where Every Child Matters the Most

Founded in 1950 by Variety Clubs International, Nicklaus Children’s is South Florida’s only licensed specialty health system exclusively for children.  It is also home to the largest pediatric teaching program in the south-eastern United States and has been designated as the American Nurses Credentialing Center (ANCC) Magnet® facility. Moreover, Nicklaus Children’s Hospital’s five specialty programs have been identified among the best in the nation in the 2022-23 U.S. News & World Report ‘Best Children’s Hospitals’ survey results. 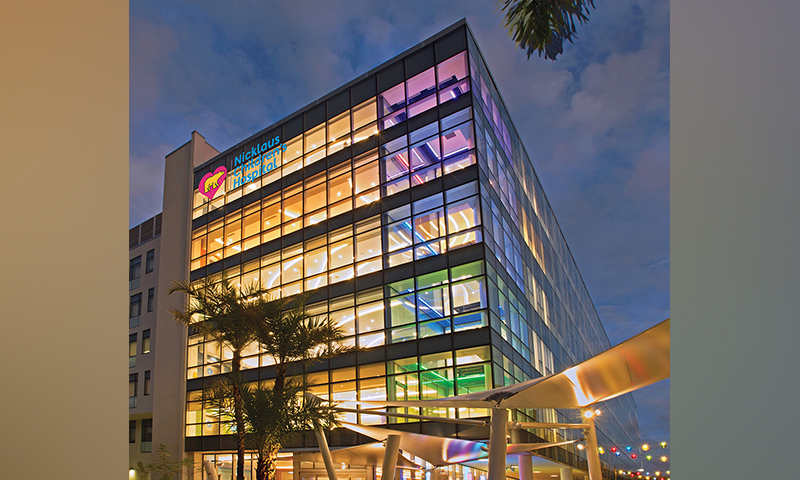 “I have been so fortunate to have had the opportunities to be successful at Nicklaus Children’s, and I am honored to now serve in a role to help my colleagues,” shares Dr. Perlyn. He understands healthcare from three different perspectives—as a surgeon, a formally trained research scientist, and an MBA/healthcare executive. Integrating these three perspectives into his leadership role truly gives Dr. Perlyn a unique position in the organization and the healthcare community at large.

Beyond all, Dr. Perlyn’s passion for driving success for Nicklaus Children’s Health System, his commitment to his own patients, and his purpose of working with his colleagues to improve the lives of children make him a thought-provoking and influential healthcare leader.  “His drive for operational excellence combined with a true compassion and deep humbleness make him such a unique figure not just at Nicklaus’s Children’s but across healthcare,” said Dr. Marcos Mestre, Chief Medical Officer at Nicklaus’s Children’s.  “We are proud to have him at the helm of our group.”

As the President of NCPS, Dr. Perlyn is responsible for ensuring that his team orchestrates the best pediatric care harmoniously. He regards this as what physician leadership should be all about as together they strive to provide a place for their their patients to flourish and their colleagues to thrive. “There are days I still walk through the halls and pinch myself. How did this little four-year-old boy not only have his dream come true to be a surgeon but also have the honor and privilege to lead the team in the very place where the dream began 45 years ago,” shares Dr. Perlyn with a smile.

Finding the Right Mentors at Every Step of the Way

A child’s first teachers are his parents, and the first school is his home. For Dr. Perlyn, his parents are the best blessings a child could ever ask for and he credits them for his deep sense of caring and curiosity about the world.  Going down memory lane, he simply summarizes his upbringing by a quote from Winston Churchill which his parents hung on their refrigerator door that says, “We make a living by what we get, but we make a life by what we give.”

Throughout his journey, Dr. Perlyn has also been extremely grateful to find the right mentors at every step. Be it Dr. Susan Mackinnon (Head of the plastic surgery program at Washington University/Barnes Hospital in St. Louis) who gave him his first opportunity in plastic surgery, Dr. Jeffrey Marsh (a world-renowned pediatric/craniofacial surgeon) who trained him, or Dr. Gillian Morriss-Kay (expert scientist at the University of Oxford), who inspired him as a scientist, all of these individuals believed in his dedication and abilities and guided him in the medical arts.  Dr. Perlyn also acknowledges Mr. Matthew Love (CEO of Nicklaus Children’s Health System), who encouraged his administrative interests and supported his decision to pursue an MBA from the Miami Herbert Business School at the University of Miami.

“I am who I am because of those who believed in and mentored me, and that is why mentoring others is now one of the most important things I do in healthcare today,” asserts Dr. Perlyn. 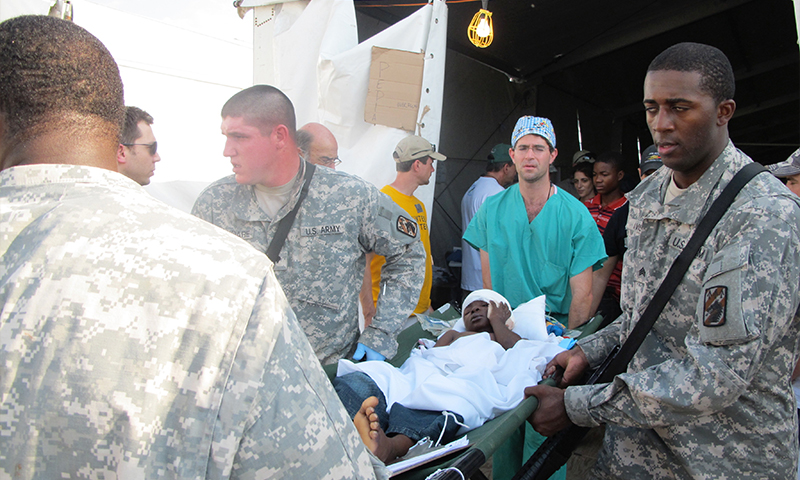 For Dr. Perlyn, running an extensive multi-disciplinary medical group and practicing as a pediatric plastic surgeon keeps him extremely busy. He also comes across numerous challenges for which he has to find appropriate solutions.

“One of the biggest issues we are facing today is physician fatigue. I truly empathize with my colleagues and understand their frustrations, their needs, and what they long for in the practice of medicine,” states Dr. Perlyn. “Therefore, listening to these issues is very important, and then working to find the harmony between the organization’s success and their success becomes the key.  This is how you ensure world-class patient care.”

The next big challenge that Dr. Perlyn and his team at Nicklaus Children’s Health System face is the escalating costs of providing quality healthcare. He feels that to overcome this issue, healthcare leaders must focus on how to provide the highest quality care in the most efficient ways, and they also need to listen to and welcome the advice of their clinicians on how to make this happen. He further explains, “We need to be looking for how to deliver value in ways that put the patient and family at the forefront but let the clinicians feel a part of the solution in a way that brings value and meaning back to their role as well.”

A Sneak Peek into the Day of a Surgical Leader

A typical working day for Dr. Perlyn begins as early as 6.30 am with scheduled meetings with his colleagues. This is followed by another round of non-stop sessions with his team on subjects such as physician recruitment, practice operations, contracting, and marketing. Next he’ll switch his suit jacket for his white coat to speak to a new patient.  Finally, his day ends by catching up with colleagues from other organizations and meeting prospective physicians wishing to join the Nicklaus Children’s Pediatric Specialists team. Being a practicing pediatric plastic and craniofacial surgeon, Dr. Perlyn still makes time to go to the operating room several days a month. From operating rooms to boardrooms, his influence shines across the organization. When asked about the hardest part of his work, he replied immediately saying, “certainly not doing complex surgeries on newborns. That requires much focus but it’s the least stressful part of the week given all the other challenges we face in healthcare administration today.”

Going forward, Nicklaus Children’s Health System plans to expand its geographic footprints by forming collaborative partnerships with organizations with similar missions and visions to provide the best care to every child. “We cannot all be everything to everyone. However, we can provide pediatric communities with the best care possible through strong partnerships. This is our sole p – to take great care of children in the highest quality way,” states Dr. Perlyn.

In light of this, Nicklaus Children’s Health System recruited over 70 world-class physicians from around the globe last year and plans to do the same this year too. The hospital is also working on establishing four institutes of excellence, including ones in cardiac, neurological, orthopedic, and oncologic care which would best serve the community in the years ahead.

On a personal note, Dr. Perlyn is excited about returning to global surgery and reuniting with his true love of mentoring surgical residents from other countries. “We will be going to volunteer in Peru this summer and I am looking forward to re-engaging with my colleagues around the globe,” shares Dr. Perlyn.  When asked what’s next in his leadership career, he replied with a big smile, “I’m curious to see where the second half of my journey goes.  While I don’t know where the road leads, as long as it involves advocating for children, families in need, and my outstanding colleagues I know I’ll be on the right path.”