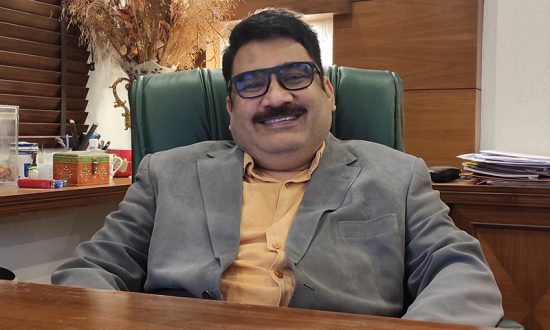 Roger Kumar is the Founder and Managing Director of CASE Group, established in January 1993. He is a mechanical engineer graduate from the National Institutes of Technology Kurukshetra, passing out batch of 1986. CASE Group was initially conceptualized to manufacture and market ‘Scale-Ban’- A Non-Chemical Water Treatment Equipment and Water-Cooling Towers. The company started from scratch and rose to become a primary manufacturer of Non-Chemical water treatment equipment& Water-Cooling Towers.

India is a developing country and one of the lifelines of development is available energy at economicaland sustainable rates.

India’s energy demands are ever increasing and is largely dependent on its crude oil imports, the rates of which are controlled by world dynamics. This unfortunately is not in control of India.

As of late, the industry in India has been under lot of stress because of constant increase in the fuel rates. Fuel comprising of Furnace oil, Propane, LDO, HFO, Natural gas etc.

There is an urgent need of indigenous energy source which is clean, economical and sustainable.

One of the sustainable, long-timesolution to the above problem is Coal Gasification.

Coal gasification is not new to India. Gasifiers are widely used in our country for the last 15 years for thermal applications. In the past there were few makes which were not in line with the Indian pollution control norms and had to closedown specially in state of Gujrat.

Fortunately,there are few technologies which are very much in the market which are in line with Pollution control agencies and are advance enough to substitute all the type of present fuels economically. These gasifiers are capable to use Indian high ash coal which is readily available. Not to forget that this replacement also saves Indian government huge amount of foreign exchange apart from the effect on inflation and balance of payments.

Coal Gasifier basically is a machine which burns coal (gasifies) in controlled oxygen environment. This process converts Carbon and volatile matter in coal into CO, CH4 and H2. The mixture of these gases is called Coal gas or Synthetic gas or producer gas. This gas burns in the furnace to give thermal energy. Because the calorific value of coal gas is on the lower side, the flame temperature is comparatively low resulting in low NOx formation. Because the Sulphur in Indian coal is below 1% for most type of coal, the Sox generated is also low as compared to Furnace oil. Further desulphurization equipment can be easily installed in the downstream of gasifiers if the user is looking for very low Sulphur in process or flue.This works on the principle of capturing H2S and is much economical than installing Desulphurization equipment installed to capture SO2 after the combustion.

Today more than 1000 Coal gasifiers are in operation in India which are serving industry in the field of Steel Reheating Furnaces, Pellet Plants, Ceramic Furnaces, Glass Plants, Heat treatment Furnaces, Galvanizing plants, Aluminum Industry to name a few. The technology today is advanced with different variants of gasifiers for just about the type of applications, size, and coal quality available.

The technology is available in both fixed bed and fluidized bed. There is flexibility to use lump coal as well as coal fines with different heat values and ash contents. The modules are available today up to 100 million Kcal/hrper reactor. Further the technologies are available which are zero liquid discharge (ZLD) resulting in no adverse effect on the environment. All type of pollution whether it is air pollution, water pollution, soil pollution or noise pollution, Coal Gasifier gets a heads up.

It is pertinent to mention here that the technologies available today comes with totally automatic process controlled by PLC. Human intervention has become minimum. The safety norms in the gasifiers are today world class with zero accident rate.

So, in the nutshell, today, coal gasification in India is an advance technology and is all set to rescue the energy demands of our country indigenously and economically.

Furthermore, these coal Gasifiers are made in India and falling under Honorable Prime Minister’s “Make in India” larger plan.

Our Honorable Prime minister has given a special push to gasification in India. And why not. Coal used in Coal Gasifiers is readily available in India and is in abundance. Roughly 300 billion tons of coal is available. With Hydrogen and EV in line to make an impact, it is prudent to utilize our fossil reserves in a professional and clean manner as soon as possible. And in the process if it can also save foreign exchange, improve balance of payments, the incentive to promote coal gasification only become bigger.

Honorable Prime minister has made an ambitious statement roughly two years back to gasify 100 million tons of coal by 2030. We need to work hard in this direction to make it possible.

Coal Gasifiers apart from heating can also be used to make urea, Ammonia, fertilizers and even Hydrogen called brown hydrogen. Talcher ammonia and Urea plant already has a go from the present government. Brown hydrogen in combination with carbon capture can be a boon for the industry and can play in line with Honorable prime ministers’ commitment in COP26 at Glasgow for India to go net-zero carbon emissions by 2070!!

Studying Abroad can Take a Toll: 5 Ways to Deal With the Stress
Business Planning Solutions for the Longevity of SMBs
How Ready to Cook Food Sector is Easing Out the Job of Hotel and Restaurant Industry
From Property Sellers to Tech Players – The Transformation of Real Estate!
The Advanced Tech and NFTs in the coming years
With Rise in the Number of Opportunities and Openings, Job Opportunities in FY22 is Significantly Growing: Talent Insight Report
CONTACT US