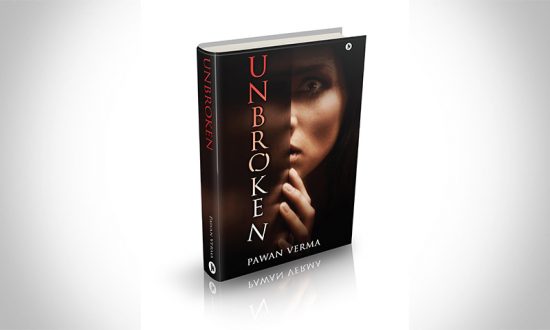 What if you are inadvertently trapped in a do-or-die battle that has nothing to do with you, but threatens your life and wrecks your family? What if the only way to save yourself from your predators is to take them head-on even if they happen to be professional assassins? Celebrated author Dr. Pawan Verma has created an engaging battle of survival in Unbroken, an edge-of-the-seat crime thriller.

This nail-biting set-up offers a gripping drama involving an innocent woman, Roma Anand, caught in the crossfire between two dreaded intelligence agencies – R&AW & ISI – over possession of India’s game-changing defence innovation? She is able to escape, but not before she has become witness to two murders and has her fingerprints on one of the murder weapons.

Roma is chased down endlessly as she has unwittingly snatched the contentious asset from the two rivals, even though she herself is not aware of it. Left alone in the world and tired of running, she decides to take on her predators and avenge the mindless violence against her and her husband. She is emotional, innocent and vulnerable, but a brave fighter. Her opponents are strong, dangerous, unrelenting and unforgiving. What follows is a cat-and-mouse game, a fierce battle between a distraught wife, seeking revenge for the murder of her husband and a bunch of professional assassins who know no mercy.

Labelled as ‘a story of courage & resilience, hope & faith’, Dr. Verma presents a crime thriller that ticks all the boxes of a good suspenseful story. It comes long after his successful foray in this genre with No Closure No Forgiveness. Even though Dr. Verma is known for his leadership writing, it is indeed gratifying to see him dabbling in both the genres with ease and expertise.

Dr. Verma reveals, “I would call it a fast-paced crime thriller that takes readers with Roma on her journey across different Indian and international locales in her fight against her predators. Even though all her support systems are taken away, she comes out as a brave fighter, outwitting her enemies. It shows how when passion meets purpose, the caterpillar becomes a butterfly.”

According to Dr. Verma, the readers are in for a surprise from the very beginning. “Every page will offer a dangerous game. Readers will root for Roma and find out if she wins this unforgiving battle against professional intelligence agencies and their merciless assassins.”

Available on Amazon, Flipkart and at other platforms, Unbroken captivates from the very first page. It is for those with a taste for a good story, narrated in a language that draws out diverse emotions while elevating you simultaneously.

The Dhartipakads of Indian elections: Shedding literary light on Indian political mavericks who contest poll after poll with a never-say-die spirit
A newly-launched book on cerebral palsy narrates an inspiring tale that celebrates life against all odds
Leadership Lessons from A Soldier
How is Vikas Chadha’s Best Seller - Secret of Success and a Happy Heart – Inspiring Millions Who Have Reached Their Brink to Give-up
Cloud Adoption, a New Mandate, and its impact on Day-to-Day lives
Riding the Multiverse: CXOs need to be ready for the opportunities presented by the Metaverse
CONTACT US